During the Victorian era, there were many sieges, some small, some large, some lasting several days and others many months. Not all sieges resulted in medals or clasps to medals and the details of the defence or relief or a particular town or fort might best be dealt with in subsequent individual blogs. This blog relates to the concentration of sieges occurring at the end of Victoria’s reign and medals to men and women who were involved.

For the collector of British medals of the late Victorian era, there are quite a few opportunities to acquire medals to men who earned clasps for the relief of more than one besieged town or fort. In the space of a little more than 5 years, three campaign medals with clasps awarded for five separate relief expeditions were awarded. I am referring to Chitral in 1895 and Kimberley, Ladysmith, Mafeking and Pekin in 1900.

The period between the reliefs and the distance between the towns ranged from less than 3 months and 400 miles when one thinks of the Ladysmith/Mafeking combination to a more prolonged period of 5 years and over 5,200 miles between Chitral and Ladysmith or Kimberley. However, I think the combination of Ladysmith and Pekin less than 4 months apart and over 7,200 miles distant from each other  gives a whole new meaning to a war on two fronts. In this blog, I will provide a brief summary of each relief and offer some examples of “double relief” awards. 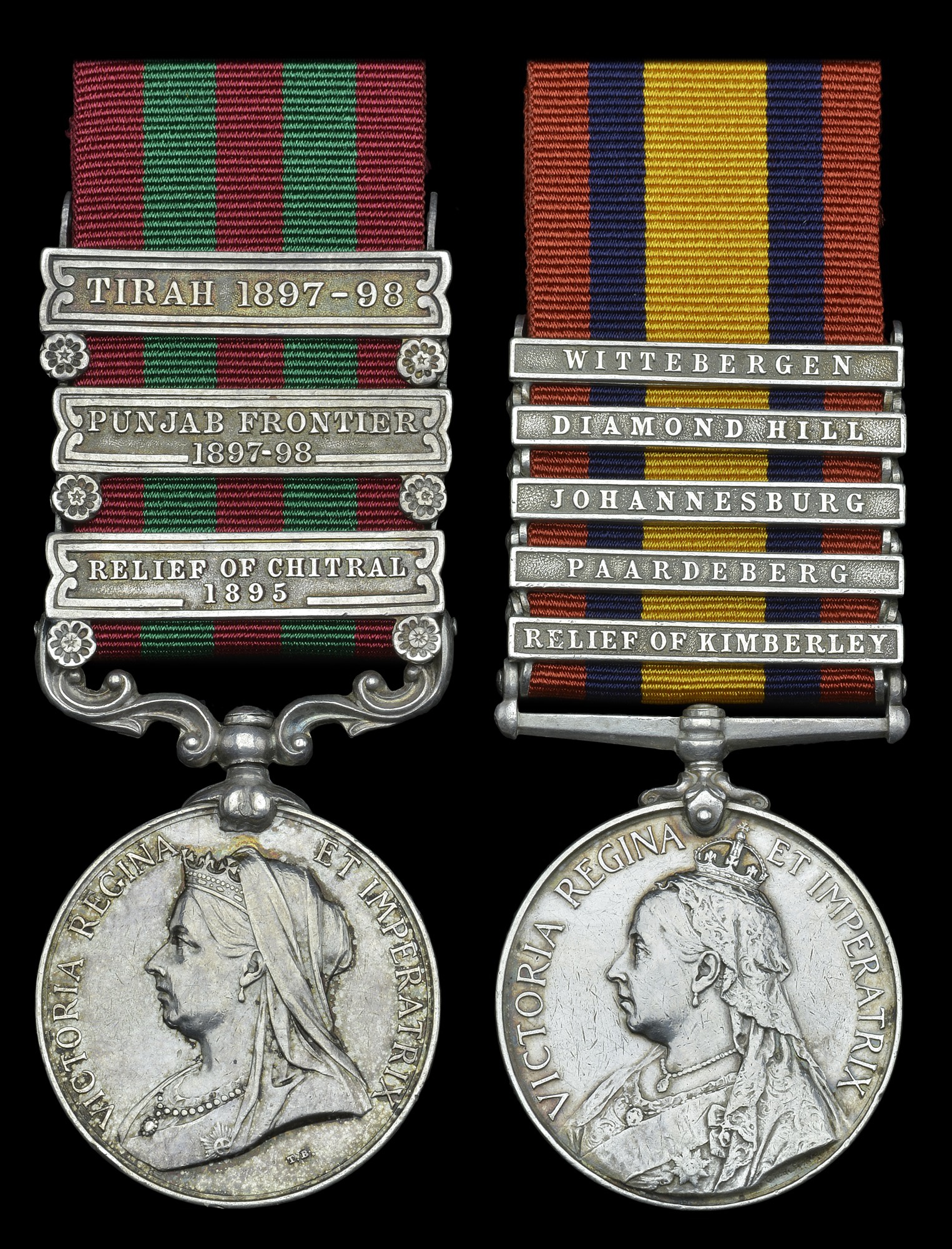 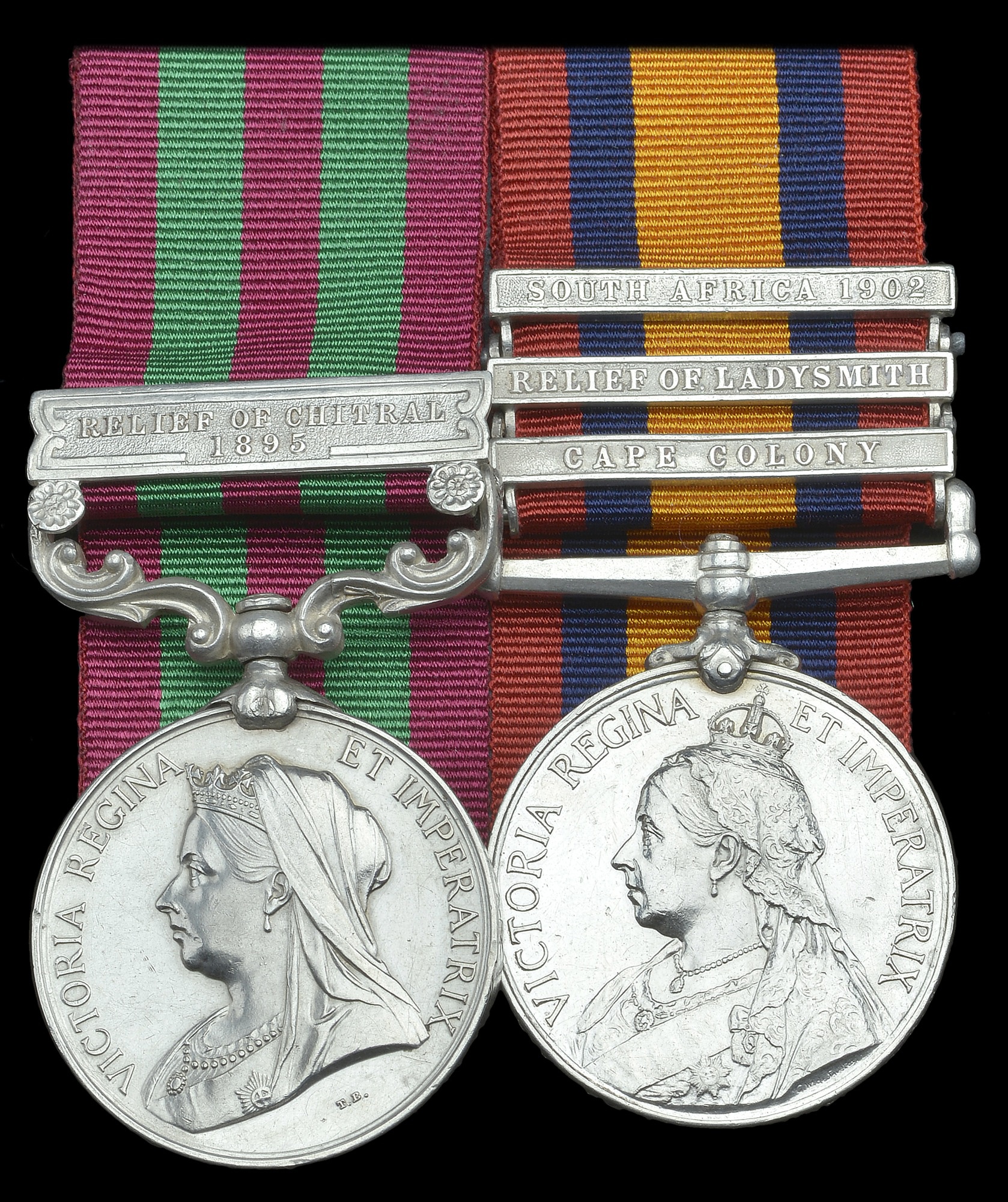 The fort at Chitral offered protection to about 350 troops primarily consisting of the 14th Sikhs and the 4th Kashmir Rifles. The besiegers amounted to between 2,000 and 5,000 and the siege lasted approximately 7 weeks. The size of the relief force (greater than 15,000) made this one of the more common clasps of the India 1895 medal

The Relief Of Kimberley, February 1900

The most prominent citizen of the town, Cecil Rhodes had been applying so much pressure to the British Government for relief that the strategy of the British Forces was amended so that the town could be relieved as a top priority and this was the shortest of the three major sieges during the Anglo-Boer War. Of the three towns besieged at the outbreak of the war, the citizens of Kimberley were well fed and suffered least by comparison.

The Relief Of Ladysmith, February 1900

Ladysmith which was arguably the most important of the three towns owing to the number of British and Colonial troops trapped in the town was relieved at the end of the month. After a siege lasting 4 months, the garrison occupants were starving, many of the horses had been used for food and there were many deaths from disease.

Mafeking was the last of the three major besieged settlements to be relieved. The garrison had been commanded by RobertBaden-Powell who later founded the Boy scouts and much the subject of much news given the fact that there were several war correspondents trapped in the town who managed to make sure that the news got out. The town wasn’t of strategic importance but after a well publicized ordeal lasting 7 months, it was a morale booster for the British and when the news of the relief hit home there was much celebration in the streets. In fact a new word entered the vocabulary “maffick” which was defined as: to celebrate with boisterous rejoicing and hilarious behavior. In one of his short stories, Saki includes “Mother may I go and maffick, Tear around and hinder traffic?”

Although the subject of the blog is about double reliefs and this clasp is sometimes seen paired with Relief of Ladysmith (about half the double relief medals were awarded to Barton’s Fusilier Brigade) it is also seen paired with Defence of Ladysmith or Defence of Kimberley which in themselves are interesting combinations of clasps found on the same medal. The double relief medals to one of Barton’s Brigade are highly sought after by collectors and a recent sighting of one on an English dealer’s site had a price tag of £900. 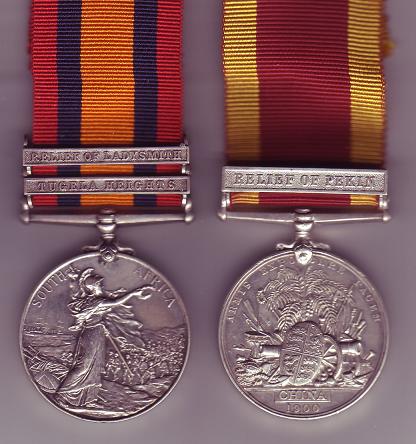 The boxer rebellion was a violent anti foreigner uprising that took place at the end of the Qing dynasty. On 30 May the diplomats, requested that foreign soldiers come to Beijing to defend the legations. The initial attempt to strengthen the International Legation in June was met with serious opposition and the small British force  who had vastly under estimated the Chinese, ultimately retreated and had to wait for reinforcements before a further relief attempt could take place. The result was a delayed relief and a 55 day siege.

Only 88 medals with this clasp were awarded to men from HMS Terrible who had also been awarded a Relief of Ladysmith clasp on a QSA after qualifying for that clasp on another continent a few months earlier.