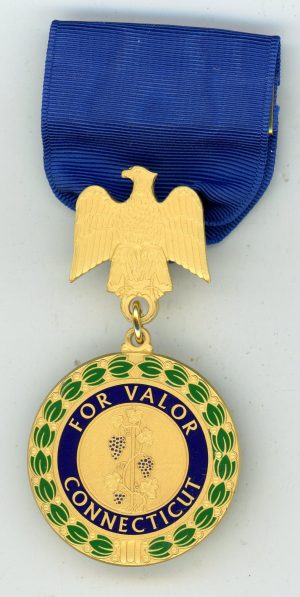 Established in 1955, the Connecticut Medal of Valor is the state’s highest award for military heroism in the performance of duty in state emergency operations. The criteria specify that the act be “conspicuous gallantry, at the risk of life, above and beyond the call of duty”. The Adjutant General and two field grade officers comprise the awards board that considers nominations.

The design of the medal has remained relatively constant, although in 2015 blue enamel was added to the obverse design..

Through July 2014, only 17 awards of the Medal of Valor have been made:

These four men, in separate incidents during serious floods in Stamford, rescued over a dozen people in October 1955.

Master Sergeant Edward F. Madigan, 169th Infantry, was instrumental in the rescue of 24 people from serious flood conditions near Winstead in August 1955.

These five individuals were crew and passengers of a Connecticut National Guard helicopter that went to the rescue of three men in a swamped boat in Long Island Sound. Although the helicopter was not equipped for water rescue operations, these individuals managed to save the three fishermen on 8 April 1984.

These five men were decorated for an action on 11 December 1992, when they rescued 34 people from flood waters in Fairfield.