Condition? It’s a large part of the story 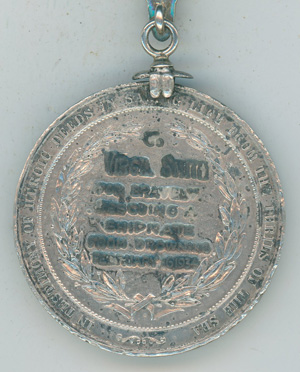 The condition of a medal can play an important role in whether or not a collector decides that it fits into his collection. Most collectors will shy away from a medal that shows obvious signs of abuse or odd condition problems. Here’s an example where condition plays a major role in the medal’s story.

It’s a Treasury Silver Lifesaving Medal, with replaced eagle suspension bar and brooch, engraved “To Virgil Smith for bravely rescuing a shipmate from drowning, February 16, 1934″. The pendant shows substantial pitting, appearing to have been in sea water for some period.

Virgil Smith, who had enlisted in 1930, was like thousands of other sailors who went about their daily peace-time duties with no expectation of unusual events. The official account of Smith’s action reads: On the afternoon of 16 February, 1934, while preparations were being made on the USS Texas to send a diver down from the bow to reave off messengers for paravane chains, there was a heavy swell which caused the ship to roll considerably. During one of these rolls the port gunwhale of the motor launch which contained the diver caught under a scupper lip. This movement careened the motor launch over to such an excessive angle that it began to take water and at the same time threw several men of the diving party into the water.

When the accident occurred the diver, Seaman 1cl W.E. Baker, U.S. Navy, had on a rubber diving suit but was without shoes, breast plate or helmet, and Virgil Smith, U.S. Navy (at that time a gunner’s mate 3c) was lacing Baker’s legs. Both men were thrown into the water and both caught hold of the scupper lip. Due to the heavy roll of the ship and the weight of the diving suit, Baker was unable to continue to hold on without assistance. Smith, upon seeing Baker’s predicament, wrapped both his legs around Baker’s waist, scissors fashion, thus assisting Baker to hold on. About this time a line was thrown to them. Due to the rolling of the ship Baker was partially submerged and his diving suit filled with water and became very heavy, but Smith continued to hold him with his legs until a boat arrived from the USS Oklahoma. A member of the crew of the boat from the Oklahoma threw the two men a line and hauled them alongside the boat. By this time Baker’s suit was full of water and was so heavy he could not be pulled into the boat until a member of the boat crew split the suit with a knife and let out the water.

While Smith’s lifesaving action was in 1934, no award was recommended until July 1940 and the medal was not awarded until January 1941. In December 1941, Chief Gunner’s Mate Smith was assigned aboard USS Oklahoma. While Smith clearly was not a fatal casualty in the Pearl Harbor attack, it seems likely that his personal effects remained in the Oklahoma on the bottom of Pearl Harbor until 1943, when the ship was finally refloated and moved to drydock. With the sinking of his ship, Smith was reassigned to the US Naval Ammunition Depot, West Loch, Pearl Harbor.

In October 1942, Smith was among those at the Navy Yard, Pearl Harbor, commended for the expeditious handling of repairs to USS Enterprise and USS South Dakota. In 1944, Smith received a letter of commendation for “meritorious conduct and outstanding performance of duty while voluntarily engaged in diving operations and directing the efforts of a group of divers incident to the salvage of vessels damaged by enemy action at Pearl Harbor on December 7, 1941…”

In his book, “Descent into Darkness”, Commander Edward C. Raymer, who had led a diving team in the recovery and salvage of ships in Pearl Harbor, touches on the subject of recovering personal effects: “After the Nevada was dry-docked and the California dewatered and cleaned, crews of sailors and civilian shipyard workers swarmed over the interior of these two battleships. The crew’s personal lockers were picked clean either by their rightful owners, if they were still in the vicinity, or by salvage crews as they systematically cleared the compartments of debris.”

Smith’s April 1944 letter of commendation for diving operations at Pearl Harbor, and the fact that the Oklahoma was raised and drydocked there in late 1943, would indicate that Smith could well have played a role in the recovery of his own medal from the salvaged Oklahoma.

Virgil Smith’s Treasury Silver Lifesaving Medal does not particularly stand out among Navy lifesaving awards from the 1930s, and its condition would give any collector pause. However, the follow-on story adds an unexpected twist to history of the medal itself.