In an earlier blog, I mused about themes and how my appetite began and developed. As I expanded my Boer War collection  and tried to fill it out with representative medals to other regiments who served where the Gordons didn’t, I simultaneously began to acquire earlier medals to the Gordons and its pre 1881 components the 75th Foot and 92nd Highlanders. Working backwards from the India 1895 medal, the most affordable campaign medal which offered quite a bit of scope was the Egypt medal. The first battalion served throughout Egypt and the Nile campaign and there are various permutations of medals with interesting clasp combinations, including some 5 clasp medals. The Afghan campaign while slightly less affordable, offered three battle clasps (out of 6) as well as the Kabul to Kandahar Star and I was able to acquire a broad range of medals from these campaigns as well as some Indian Mutiny medals and a MGS. However, since the regiment didn’t serve everywhere, the limitations common to all regiments meant that several campaigns which interested me would fall outside my regimental theme.

It was at this point that I considered collecting medals to the Royal Engineers or Royal Artillery to form some kind of cohesive collection which might be broader in scope than any single regiment but instead I opted for the Royal Navy to provide me with the variety that I was looking for.  Naval medals have historically cost a bit more than those to the land forces primarily I assume due to the smaller number of medals issued but after buying my first medal to a sailor and obtaining his Service Record, I was hooked.

Fellow blogger William Pickering created a blog earlier this year which can be seen here. This superb blog explains in great detail how much information can be gleaned from a Service Record.

I think the first thing that struck me was how often sailors changed ships and while the soldier may have been with the same regiment for 12 years, a similar span of time for a sailor could easily have involved service aboard a half dozen ships or more. This aspect alone allowed me not only to consider the service for which a particular medal was awarded but to delve in to earlier and later service on different ships for which there were no medals. Chasing pirates, capturing slavers, witnessing a historic event, serving under famous Captains and all other sorts of interesting aspects of a sailor’s life awaited. 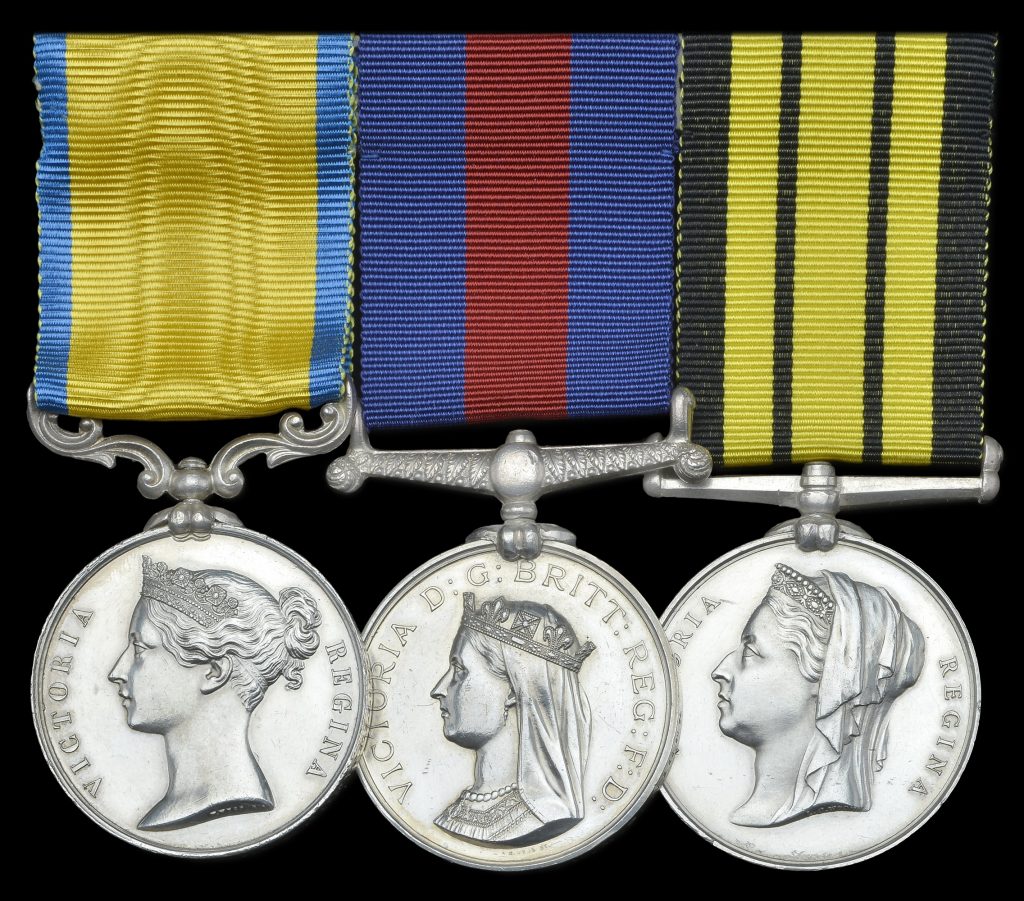 Sadly many of the epic mid-victorian campaign medals to the Royal Navy were issued unnamed and it is common therefore to see groups of medals which contain both named and unnamed medals. Some of these medals feature contemporary engraving and are more prized than un named medals but without a doubt, the combinations of medals to the RN/RM are likely without equal. Shown to the left for example are two groups which illustrate this nicely. 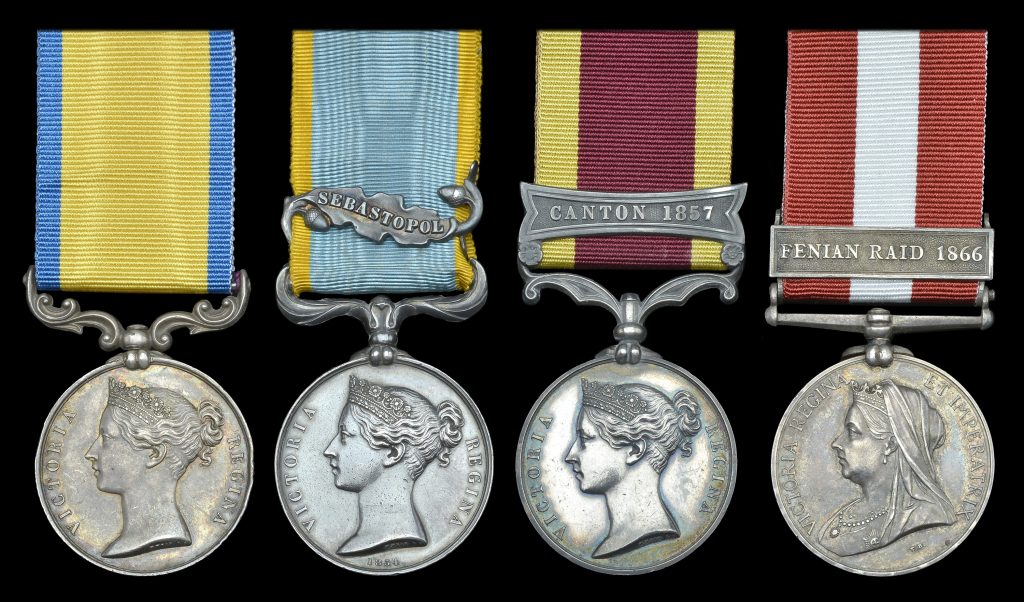 Of course many naval medals are singletons; often a single campaign medal or a long service and good conduct medal but the service record can reveal a very interesting career which includes exploits for which no medals were given. The man’s naval career is paramount but researching the history of a ship before or after the man whose medal you have, was on board, adds another dimension which doesn’t have an equivalent “bonus” for the army collector. Since my interest is primarily Victorian medals, the variety of ships served by these men also illustrates how naval warfare has changed from the age of sail to the age of steam and beyond. I think it’s this ability to research not only the man, but also the ships he served upon, which has led me to describe myself these days as principally a collector of naval medals. 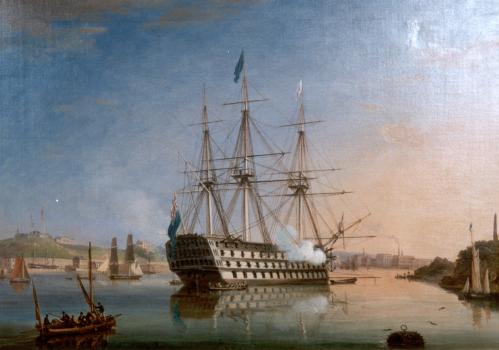 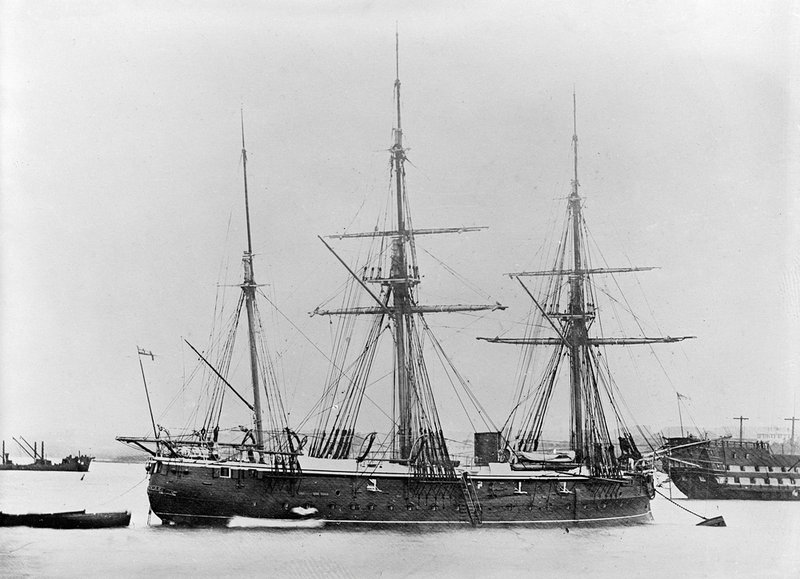 To illustrate my point, one of “my men” served in both of the ships pictured above. They are HMS Dryad launched in 1866 in which he served as Bosun in 1867 and HMS San Josef launched by the Spanish in 1783 and captured by the Royal Navy at the battle of St. Vincent in 1797 in which he served as a 12 year old boy in 1838. An 83 year gap between launches, each representing the technology of their day and each with a story to tell.

Although most of the naval medals are named to the more common rates like Ordinary Seaman or Able Bodied Seaman, the range of different rates aboard a ship creates interesting opportunities for a more specialized theme; perhaps medals to pursers, chaplains, carpenters, schoolmasters or other warrant officers have a special attraction or since various trades are also well represented, one might want to collect medals to cooks, plumbers, sailmakers, blacksmiths, coopers or painters…. the list goes on. The medal pictured above, to a plumber clearly shows the engraver’s “tram lines”

I have developed an interest in medals awarded to boys. These are commonly found where naval medals are concerned but less so in the army other than perhaps to the occasional boy drummer.**

These medals to youngsters often lead to researching men with long and interesting naval careers. One of my medals was awarded to a boy who was 14 at the time of the action for which the clasp was awarded, but who entered the Navy six years earlier as an 8 year old servant. Since his one and only medal wasn’t issued until 47 years after the event, (it’s a Naval General Service medal) being young at the time certainly helped.

It may not be wise to limit a medal collection by sticking to an overly narrow theme since you may miss out on something of interest but having a theme whatever it may be, allows you to avoid the scatter shot approach to collecting.

In closing, I think all collectors generally know what they like and probably all of us irrespective of our declared themes, will always have a sub theme of “whatever catches my eye” which makes this such a personal hobby for thousands of collectors.

** Very recently, I noted one exceptional army example and that being a 4 clasp MGS appearing in the July 2017 DNW auction,  to a drummer who was enlisted at the age of 4. He served as an under aged drummer and earned all clasps before turning 18 and rose through the ranks to eventually become Drum-Major.