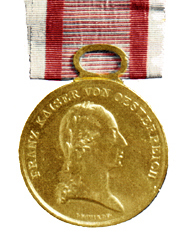 In this blog I am going to discuss the 1810-1839 Bravery Medal (Tapferkeitsmedaille). These were the seventh and eighth medals issued by the Austrian Empire specifically as a bravery medal and the first to be called Bravery Medal. In this and subsequent blogs I am going to take the reader through the evolution of the bravery medals from the first one issued in 1789-1791 by the authority of Emperor Joseph II (see previous blogs) to the last of this type of medal issued in 1917-1922 by Emperor Karl I.

Reason Issued:  As a reward for bravery for enlisted personnel while in combat with an armed enemy

Design:  A round medal with a coined flat oval suspension eye. 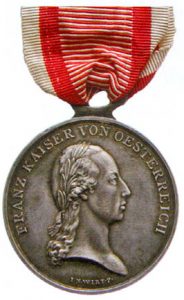 Obverse (Figures 1 and 2): Inside a raised rim is the bust of Emperor Franz II with long flowing hair facing to the viewers right, with a laurel wreath on his head. Around the bust is inscribed: FRANZ KAISER VON OESTERREICH. Below the bust is inscribed I N Wirt F. (the F is not part of the signature of the medalist but rather stands for fabrikat or in English fabricated) 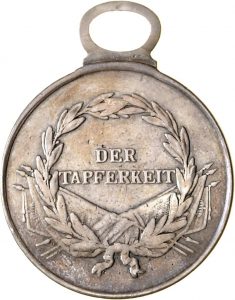 Reverse (Figure 3): The reverse of the medal has four crossed flags and two crossed standards at the bottom.  The two front flags can be seen through the leaves of the laurel wreath and appear to have the Austrian Coat of Arms (the barred shield), with an archdukes hat above it, the latter is also recognizable on the standard over which is superimposed a laurel wreath which is tied at the bottom with a bow. Within the wreath and above the flags are the words DER TAPFERKEIT (for bravery)

Figure 4: The War Ribbon on which all awards were awarded. Image from the author’s archive.

Figure 5: A gold attachment clasp as found on the gold Bravery Medal. Image from the author’s archive.

Attachments Figures 5 and 6):  A clasp shaped like an H which has been laid on its side. In the center of the H is a round raised image of Emperor Franz I with long flowing hear and a laurel wreath on his head facing to the viewers right. These bars were unofficial and were worn based on the personal preference of the recipient. They were often worn on a ribbon in the button hole instead of the full size decoration. The wearing of these clasps on ribbons without the accompanying medals was prohibited after 1811. After that time they could be worn only on the decoration ribbon. In some instances the fashion was to wear the medal reverse side forward since the bar on the ribbon depicted the obverse of the decoration. 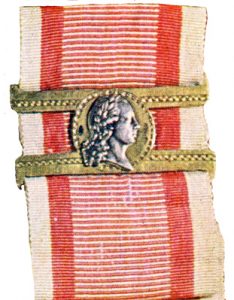 Miniature:  Miniatures of this medal could be worn after 1826.

I hope you have enjoyed this blog. I look forward to sharing more information with you regarding the awards of the Austrian and Austro-Hungarian empire.