In this blog I am going to discuss the Bohemian Nobles Cross for the years 1813-1814. This cross was created as a reward for the Bohemian nobles who formed a life guard to protect Emperor Franz I while he was in the field during the war with the French empire. It is an award with a wonderful story to tell.

Reason Issued: Funded by Emperor Franz I as a reward for those Bohemian nobles who formed his personal guard from the winter of 1813 until he entered Paris in 1814. This was during the war against the French.

· Once Austria had joined the anti-Napoleonic coalition in the summer of 1813, it was decided that the emperor, who was staying at that time in Prague would personally accompany the armies, and in particular the Bohemian army, in the campaign against the enemy. This occurred in December of the year 1813. At this time the Bohemian aristocracy decided to establish a special guard unit composed of 100 Bohemian nobles who, do to age or background, did not hold commands in the army to accompany and guard the emperor for the duration of the campaign. Thus the Bohemian Aristocratic Guard, also known as the Bohemian Noble Guard was formed in the winter of 1813.

· The members of the Bohemian Noble guard wore their own uniform, which was in the form of a white coat, with red paspeliert, and white trousers with red Lampasas. The red collar and the cuffs have gold borders; additional accoutrements were a black bandolier, a black and dark green bicorn hat with black Egret feathers.

· Emperor Franz I created the order in 1814 in Paris

· Only three of these crosses are known to still exist

· Recipients of this award also received the 1813 war cross

· This was the first Bohemian Decoration

Design: An eight pointed garnet red enameled gold Malta type cross with a large 13 mm vaulted round center medallion and a flat half circle eye attached to the top arm of the cross. Through it passes a 14 mm long and 2.5 mm wide highly arched suspension ring with a channel in the center. 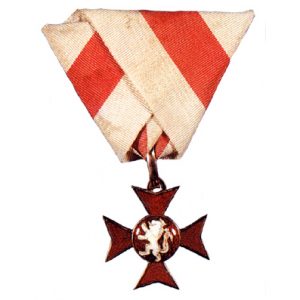 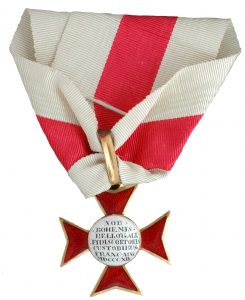 Size: The cross is 30.25 mm long including suspension eye and 28 mm wide with a 13 mm in diameter center medallion

Figure 3: Bohemian Nobles Cross for the Year 1813-1814 Ribbon. Image from the author’s archive.

Ribbon: The ribbon is 39 mm wide and is divided into 13 mm thirds with the outer thirds being white and the center third being vermilion. The color of the ribbon of the decoration corresponds to the Bohemian national colors

· From 1814 to 1848 the ribbon was strait and was worn in the button hole. After 1848 it was converted to the standard tri-fold ribbon and was worn on the left side of the chest.

Miniature: Miniatures of this cross are known to exist. 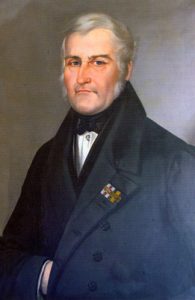 Figure 4: Jan Vaclav I Prince Dobrzensky von Dobrzensk wearing the ribbons of the Bohemian Nobles cross and the 1813 Army Cross. Image from the author’s archive.