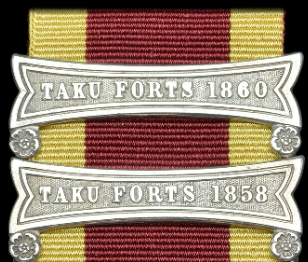 The common approach to awarding British medals or clasps only for victories has a downside. What interesting events took place that were characterized as a defeat and  therefore did not end up with a  medal or clasp to commemorate the event? I don’t know much about the events of the battles that took place during the second “opium war” from 1856-1860. I do know that a medal was issued with 5 clasps, 6 if you include China 1842. Two of the clasps were for the battles at Taku Forts one in 1858 and one in 1860. This suggest that there were two battles , two years apart when in fact there was a disastrous engagement in June 1859. Disastrous from the British standpoint that is, that isn’t commemorated .

I learned of this when I purchased a Long Service and Good Conduct medal to a Royal Marine. As it happened, the young lad sent a poignant letter home shortly after the 1859 battle and the letter was published in the local newspaper.

The letter is transcribed below:

LETTER FROM A NORFOLK SOLDIER

The following well-written letter is from a young man whose parents reside in Diss in this county:-
H.M.’s Ship “Assistance” June 29th 1859

My dear parents,
I received your kind and welcomed letter, and was very glad to hear you are all well, as I am happy to say I am; thank God for it! I am sorry to say we had another engagement with the Chinese, and got defeated and lost a great many men.  Our loss was 173 killed, wounded and missing, out of our battalion. There were not more than 400 landed of our battalion. We had to leave the boats above 300 yards from the shore and wade right up to it, and a regular take-in it was for all of us, for we thought to take the forts without any trouble, but we were greatly mistaken. It was at the mouth of the Peiho River on the 25th of June, as were we going up to Pekin to ratify the treaty; they opened fire upon us from their forts and we returned it from the gun-boats. They fired a long time before we attempted to land, and it was a regular massacre. We have four gun boats and one dispatch boat. Their names are “Cormorant”, “Lee” “Kestrel”, “Haughty” and “Plover”. The latter had 32 killed and wounded and only 1 marine, boatswain’s mate and two boys left of her ship’s company.

The “Chesapeake” had 35 killed and wounded. I can’t tell you half of them but you will see by the newspapers. From what I learn, we had about 1200 and the French 100 engaged. We have about 600 killed wounded and missing. It is a mystery to me that any got off from the shore for as soon as we jumped off the boats we were up to our waists in water and mud and we landed right in front of the fire from the forts. They cut us down like grass and we couldn’t help ourselves in any way. Before I jumped from the boat I saw about 40 men fall one shot knocked down seven men- killed and wounded. I managed to get up to the walls and we were up to our armpits in water and they were throwing rockets and liquid fire amongst us in all directions. After dark, our ammunition was wet, and our officers found there was no chance of taking the place, so they gave us the order to retire which we did with unwilling hearts. In coming back we lost nearly as many men as we did going up. I fell in with one of my messmates shot through the thigh, and in stooping to bind up his wound, a shot struck my cap cover and cut it all the way across, and I thought that quite close enough. A little way further I fell in with one man with his jaw smashed to atoms, and he died. There were plenty laying about in all directions with shots through their arms and legs; some dead and some not. We could not stop to help them till we came back and then the time had come up and drowned them. I got hit myself four times but they happened to be spent balls so they did not hurt much, for which I was very thankful. I got five wounded men down to the boats, so that they got on board and a hard job I had with them.

I put them on a scaling ladder, with some gratings lashed on, and so dragged them, but it was all I could do to get along with them. At last I got one or two to help me, which made it a little better for me. The wounded men were four marines and one bluejacket. The former belonged to our battalion and the latter to H.M.’s Ship “Highflyer” he was shot through the back. I had to kneel down in the water up to my neck and hold him on each side and his face on my bosom just out of the water. I was in this position for three hours, without moving, and when I did get a hand, I couldn’t move, and as to standing up, I couldn’t have done it if anyone had given me £1,000.  I was in the water until 2 o’clock a.m. and had my wet things on until 10 o’clock, and then had dry ones to put on. The Admiral was wounded in two places and so was our Colonel. Captain VanSittart belonging to the “Magicienne” is dead. In our battalion we have 1 officer killed and 13 wounded and 173 non-commissioned officers and privates killed and wounded.
– From your loving son, WILLIAM TOVELL, Corporal, Royal Marines 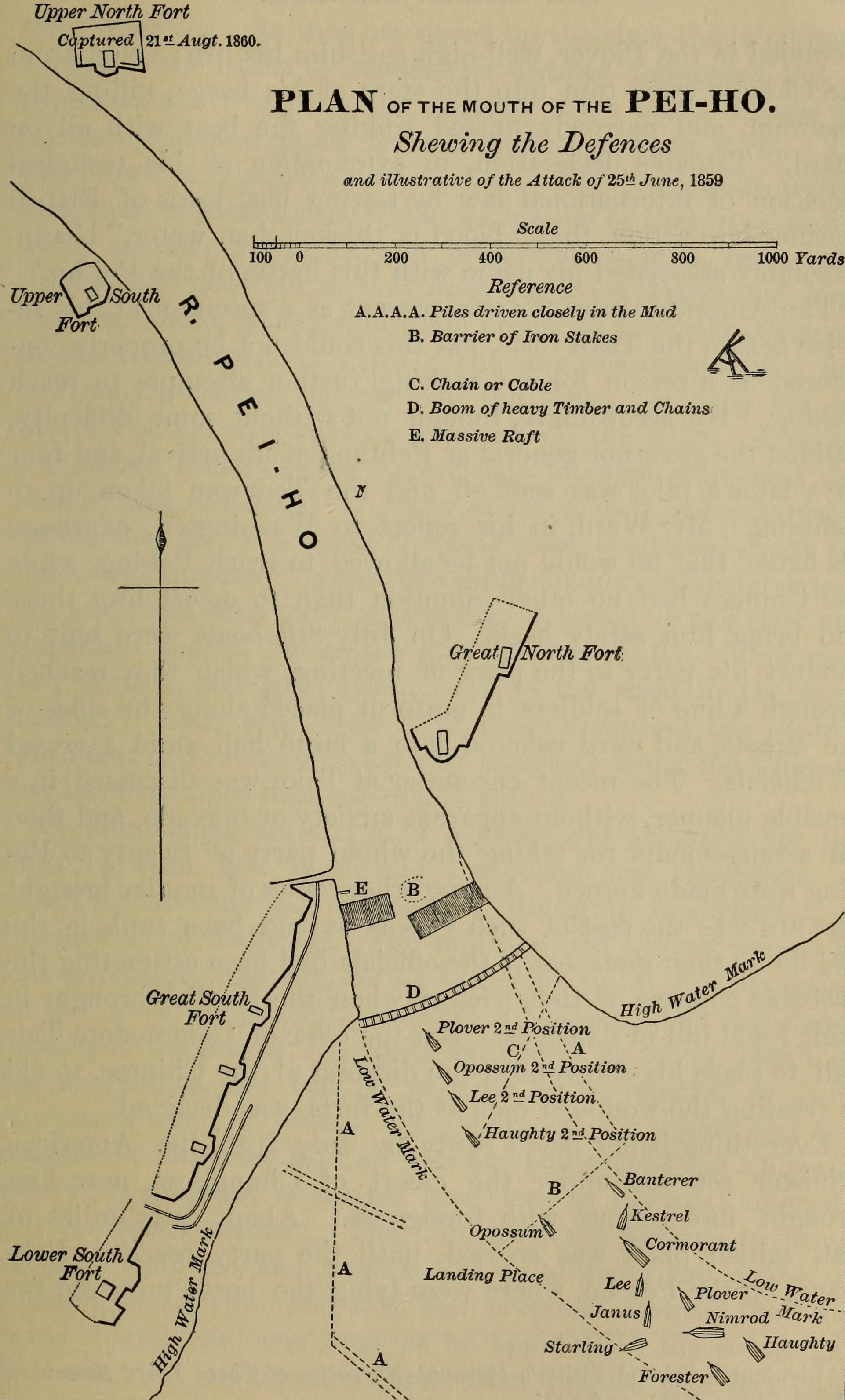 After reading this, I thought, this man deserved a medal. We have all heard the term a “hard earned medal” and this brought home to me the fact that this experience sandwiched between the first battle against the  Taku Forts in 1858 and the third battle against the  Taku Forts in 1860 may have all but been forgotten as a result of a defeat caused in part by a gross under estimation of the enemy’s capabilities. Of the three battles against the Taku Forts, this arguably may have been the toughest from the British point of view.

Forgotten in spite of the fact that it was a significant engagement involving not only a large contingent of  British forces but her French allies and an American steamship also got involved…………. which brings me to the title of the blog.

“Blood is Thicker than Water”

On June 25, 1859, U.S. Navy Commodore Josiah Tattnall, in command of the American Squadron in Far Eastern waters, made this adage a part of American history when explaining why he had given aid to the British squadron in an attack on Taku Forts at the mouth of the Pei Ho River, thereby infringing strict American neutrality.

This was an unanticipated story arising from the purchase of a Long Service and Good Conduct Medal and one of the distinct pleasures that can be found  in this great hobby of ours.