Hans Veith was born around 1900 to Dr. Julius Veith and Edwig Veith nee von Valentini.  To learn more about his parents, please see the OMSA Blog article here:  Bavarian Senior Staff Physician of the Reserve Dr. Julius Veith  When the War began in 1914 Hans was too young to be conscripted.  Hans enlisted and was reportedly the youngest member of his regiment.  In August of 1918, Hans began training as an Airial Observer. 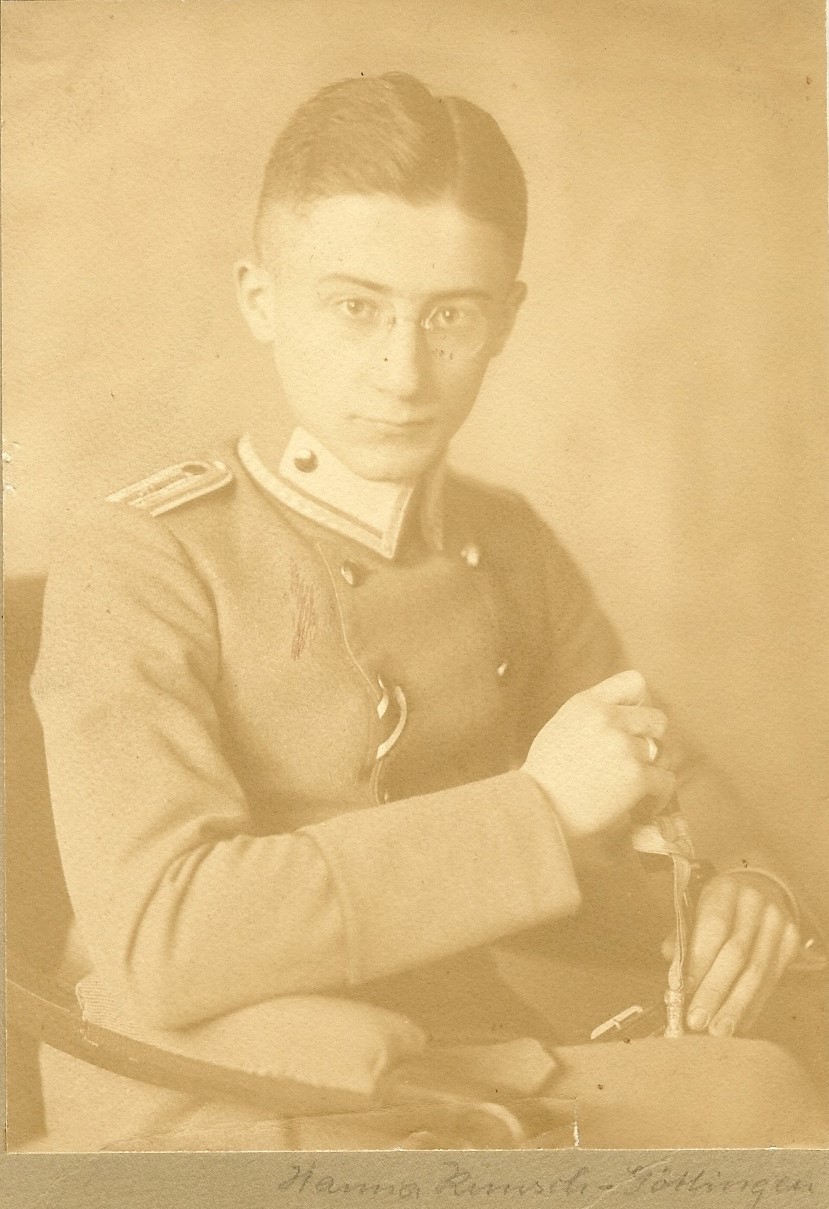 Some of the awards of Hans Veith are seen in the photo of his large medal bar (Frackspange) shown below.  In the first position is a Prussian Iron Cross 2nd Class, followed by the Bavarian Military Merit Order 4th Class with Swords, the Hindenburg Cross with Swords (Honor Cross of the World War 1914-1918 with Swords), and the Kyffhäuserbund Medal. 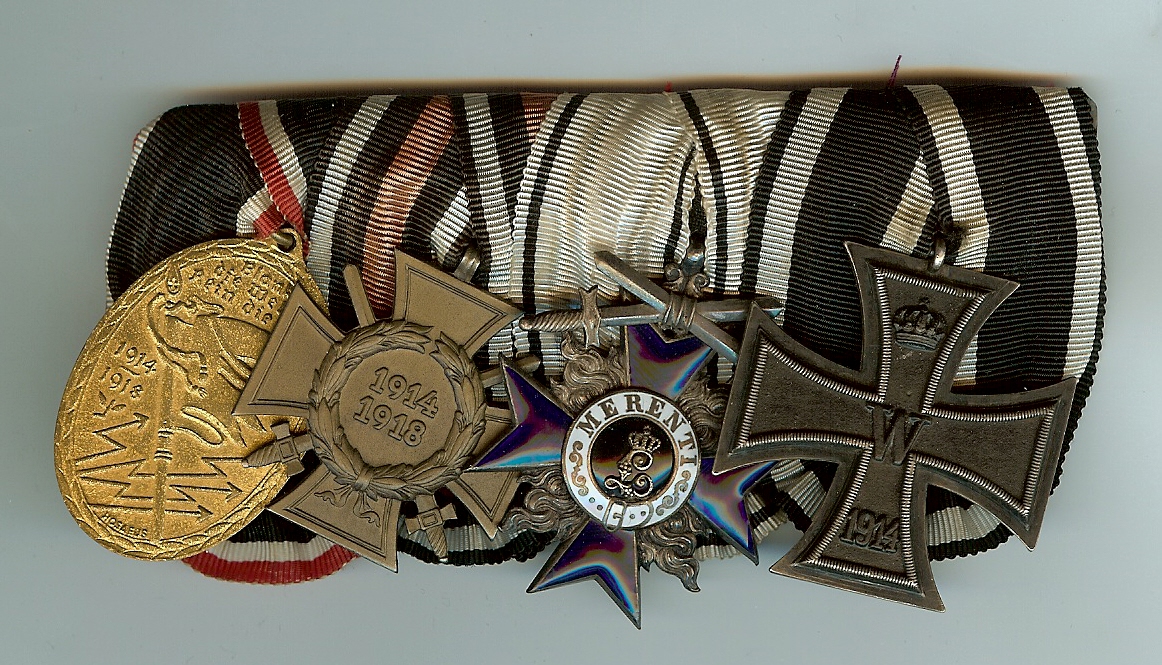 Hans Veith was also awarded the Prussian Iron Cross 1st Class and the Wound Badge in Black for one (1) or two (2) wounds. 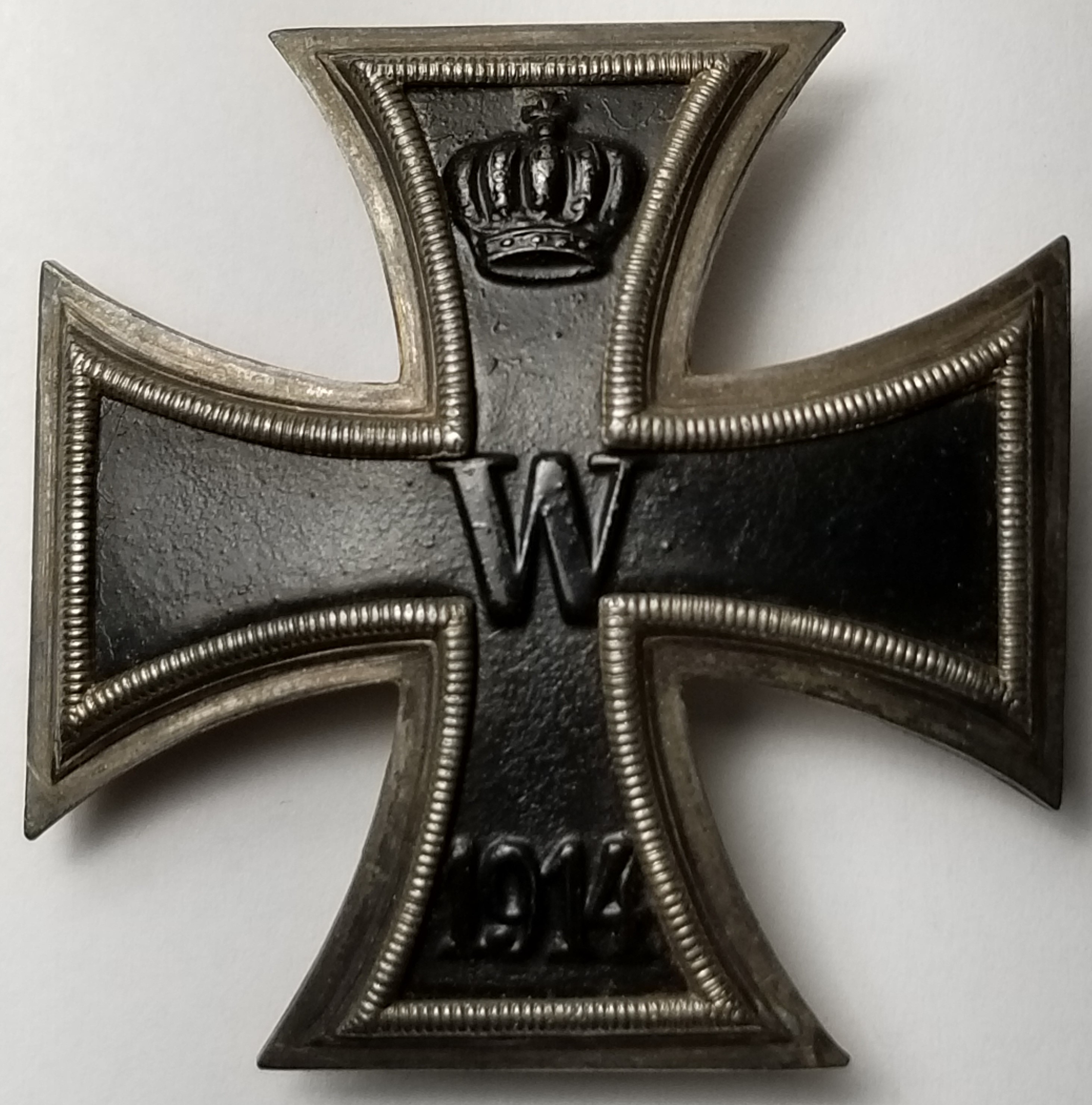 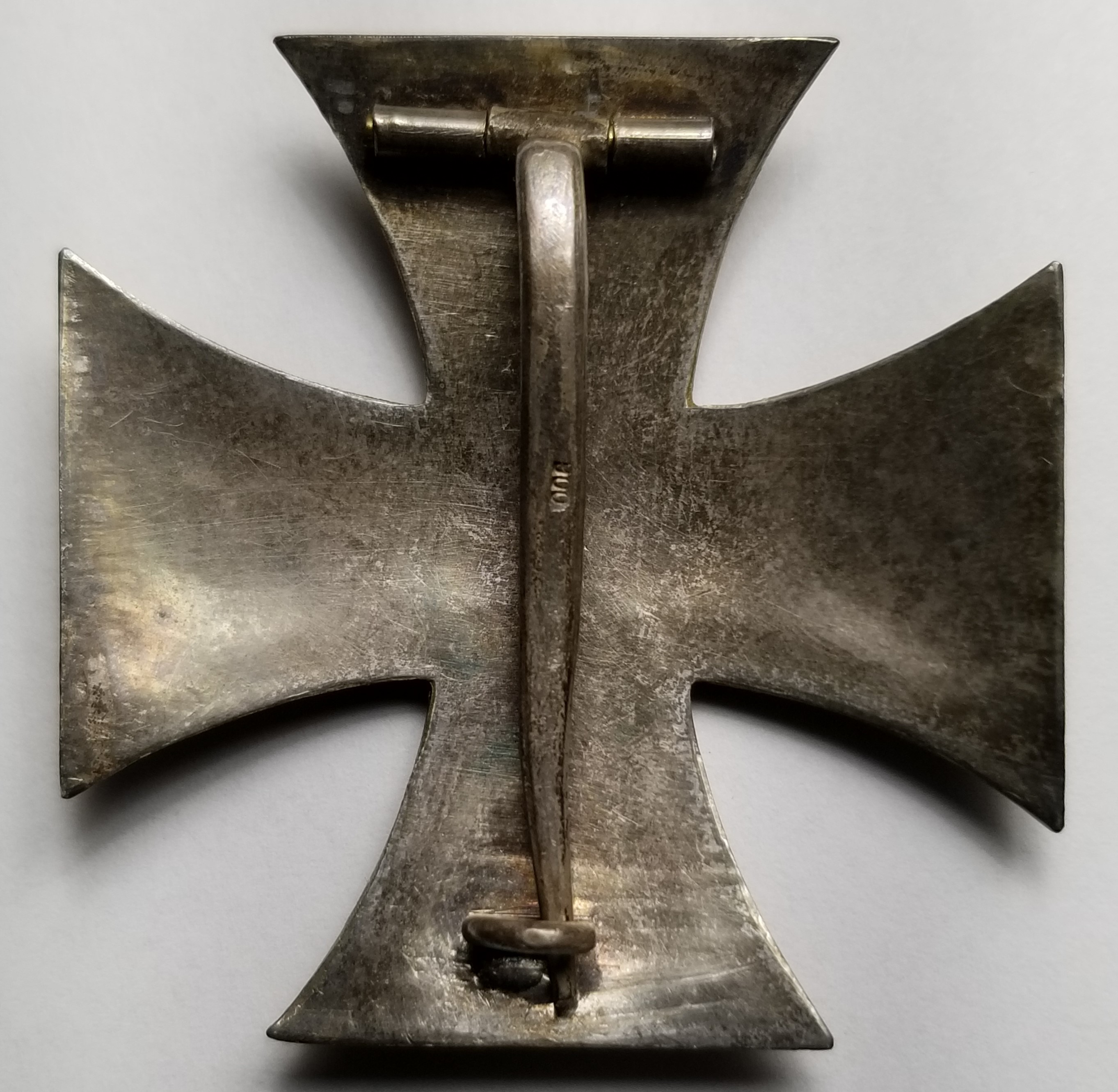 The photo below is of Hans after the War ended in 1918.  In the photo (circa 1919), Hans is wearing a Freikorps uniform.  The detail of the collar insignia is difficult to see in the photo, however, it is believed that he may possibly be wearing the insignia of the Bayerisches Freiwilligen Detachement Bogendörfer or of the Freiwilliges Landesjäger-Korps. 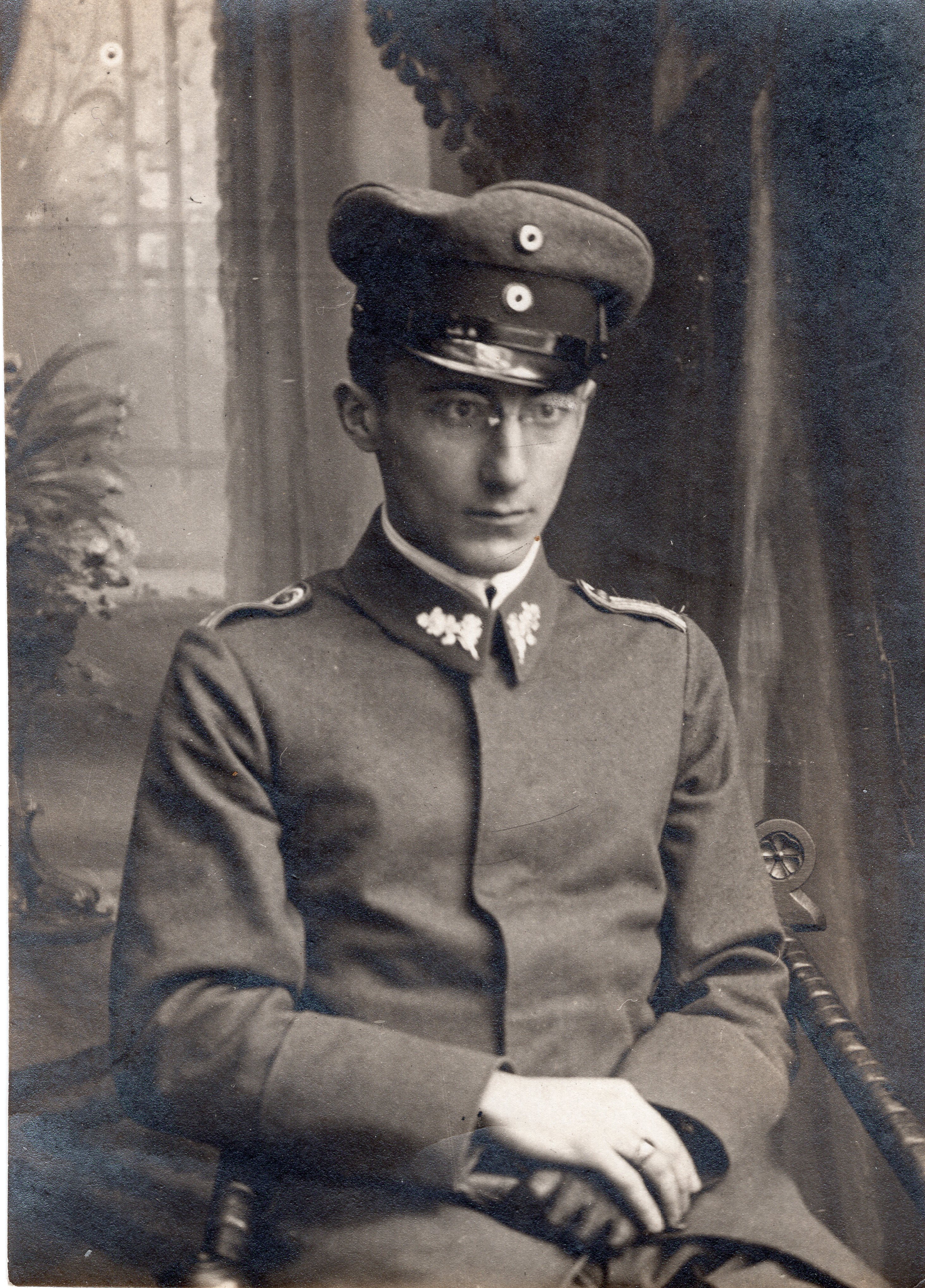 Figure 5-Hans Veith in a Freikorps uniform (circa 1919). Image from author’s archive.

Shown in the photos below is the Bierzipfel given to Hans Veith in 1919 when he joined the Corps Brunsviga Göttingen as a new member (Fuchs).  This was given to him by senior student and Corps Brunsviga member Hans Nahme.  It is engraved: “Hans Nahme/ s./L. Lbf. (seinem Lieben Leibfuchs)/ Hans Veith”.  Hans Veith therefore attended the Georg-August-Universität Göttingen.  It is believed that he studied law and worked as an attorney after he graduated.

Figure 6-Obverse of the Bierzipfel given to newcomer (Fuchs) Hans Veith by senior student Corps Brunsviga member Hans Nahme in 1919. Image from the author’s archive.

Figure 7-Reverse of the Bierzipfel given to newcomer (Fuchs) Hans Veith by senior student Corps Brunsviga member Hans Nahme in 1919. Image from the author’s archive.

Hans Veith married Ilza Hirschmann on October 20, 1935.  In the photo below he is seen wearing his large medal bar (Frackspange), his Prussian Iron Cross 1st Class, his Wound Badge in Black, and his Bavarian Commemorative Flyer’s Badge (Flieger-Erinnerungs-Abzeichen). 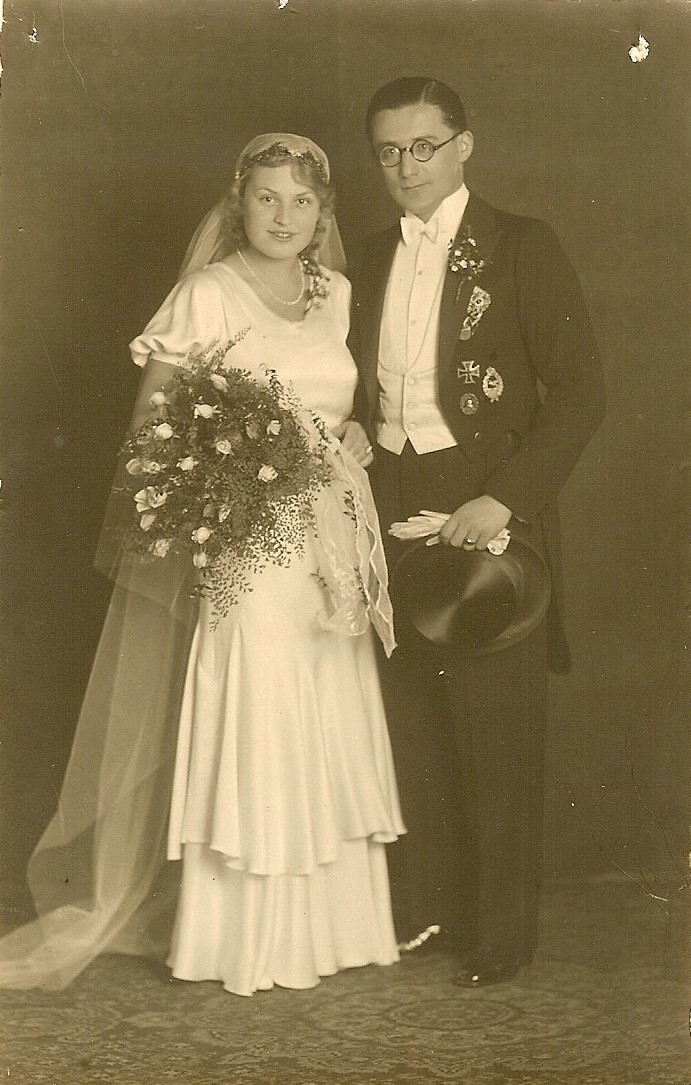 Figure 8-Hans Veith and his bride Ilza Veith nee Hirschmann on the occasion of their marriage on October 20, 1935. Image from author’s archive.

After the Nuremberg Laws (Nürnberger Gesetze) were enacted on September 15, 1935, life became difficult for the Veith family.  In order to avoid persecution, Hans and his wife Ilza, and his parents, fled Germany and moved to northern Italy.  Han’s father Dr. Julius Veith was from a Jewish family, but was non-practicing and was a member of the Lutheran Church.  Han’s mother Edwig was from a noble Prussian family.  Hans and his wife Ilza also fled Germany as he was considered a Jew under the Nuremberg Laws (Nürnberger Gesetze), since he was “half-Jewish” and he had married Ilza who was Jewish.  The Veith family then fled Italy in order to avoid further persecution under the regime of Benito Mussolini, and with great difficulty, they managed to travel to the United States.  They then resided in Baltimore, Maryland.

Hans and his wife Ilza then lived one floor below the elderly Veith couple in the same residence.  One day in August of 1939, Hans  returned home from work and found the bodies of his deceased parents upstairs.  The gas stove had been left on in the apartment.  They were found arm in arm at a desk.  On the desk were two (2) suicide notes.  One suicide note left by the couple was addressed to their son Bernard (brother of Hans) who had been unable to leave Europe and it stated “Have courage”.  Another suicide note left by the couple stated “We seek happiness together in eternity”.  Dr. Julius Veith was 73 years old when he died.  Per Hans, his parents managed to come to the United States “But they were not happy.  They were physically exhausted and spiritually sad”.

It is believed that Hans worked as a US civilian contractor during the Second World War as evidenced by the photos shown below. 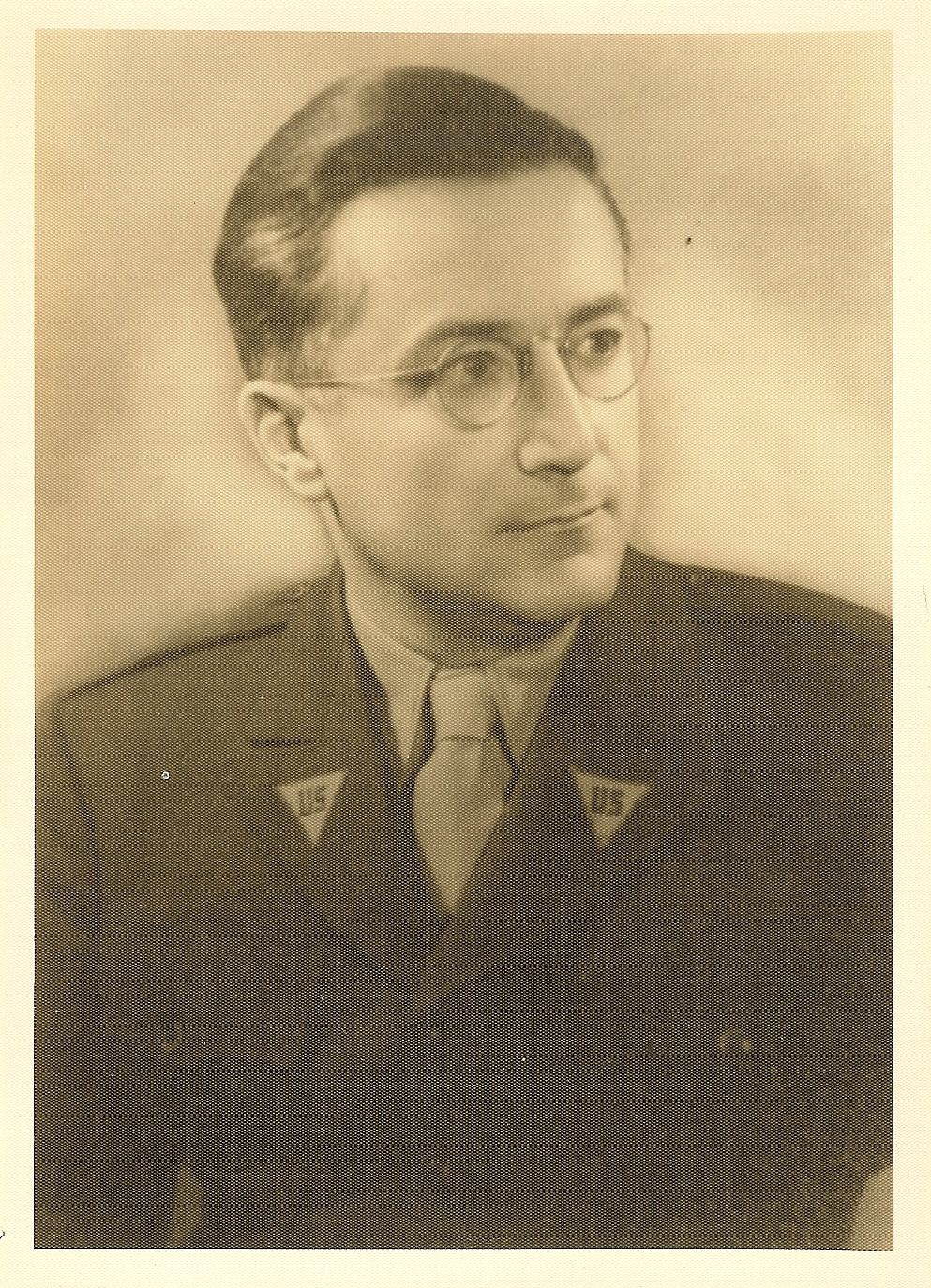 Figure 9-Hans Veith in a US civilian contractor’s uniform (circa 1940’s). Image from author’s archive. 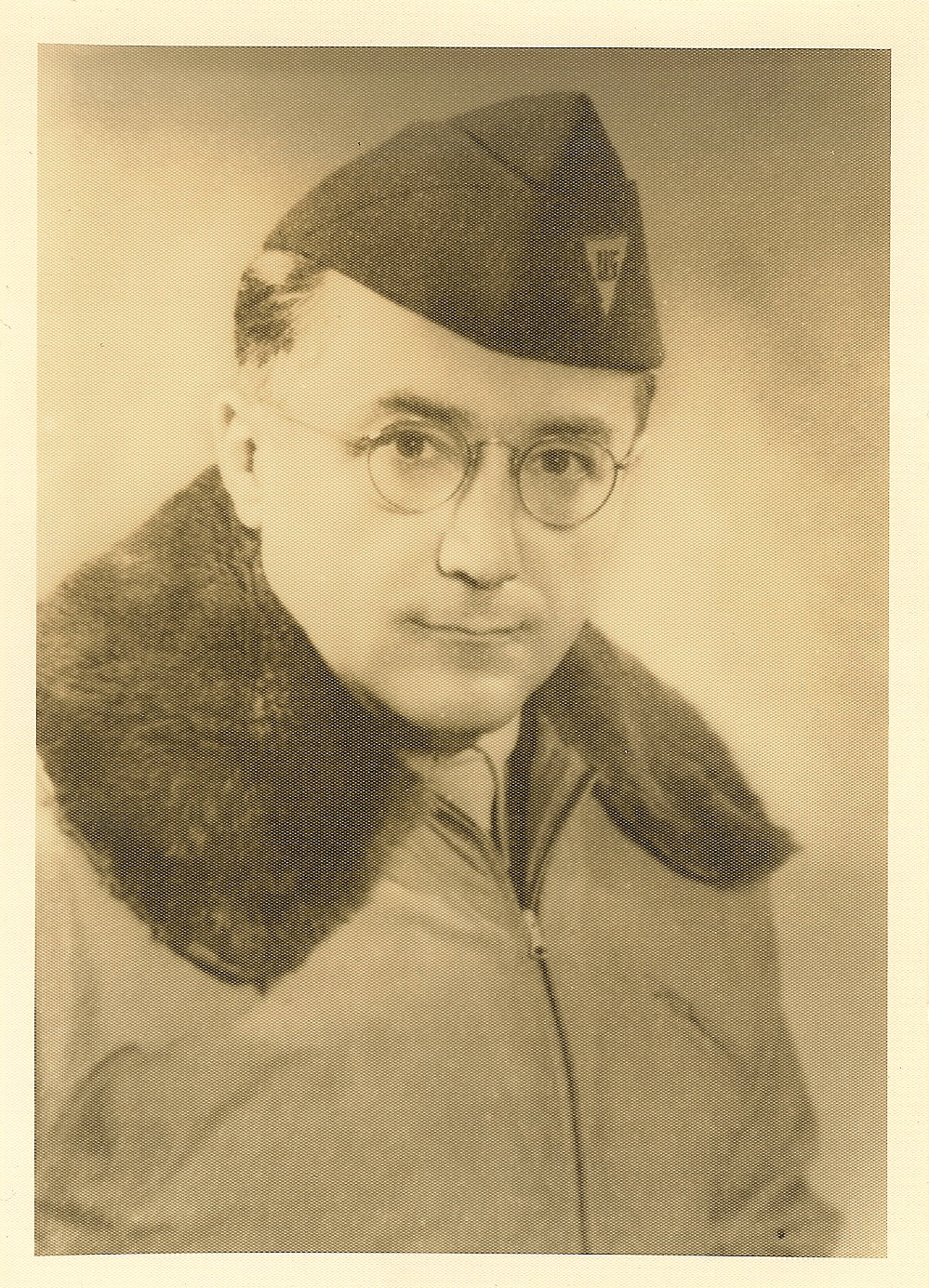 Figure 10-Hans Veith in a US civilian contractor’s uniform (circa 1940’s). Image from author’s archive.

On February 23, 1945 Hans Veith became a Naturalized Citizen of the United States of America.  Hans officially recorded his name as “Hans von Valentini Veith” on the Naturalization Certificate.  He also often went by the first name “John” after moving to the United States. 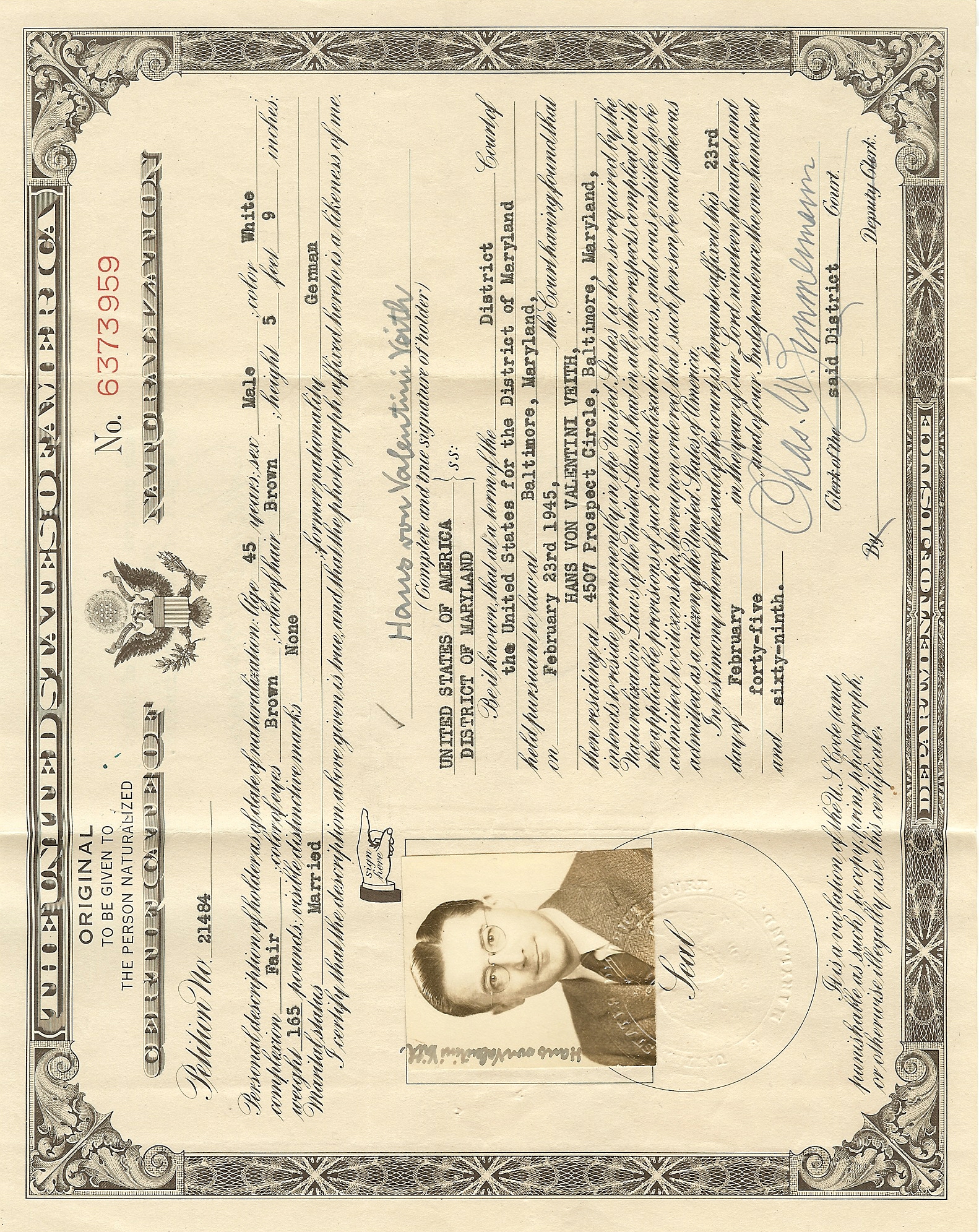 The image below is of a 6850th Internal Security Detachment Distinctive Unit Insignia that was owned by Hans Veith.  The 6850th Internal Security Detachment was responsible for the security of the Nürnberg prison where prisoners were held while awaiting trial under the International Military Tribunal, United States Forces, European Theater (USFET).  Due to the fact that he was an attorney, was fluent in German, and was working as a US civilian contractor, it is possible that he may have been somehow involved with the Nuremberg Trials.  The DUI was made by Ludwig Christian Lauer of Nürnberg and is marked: “L. CHR. LAUER/ NÜRNBERG” on the reverse. 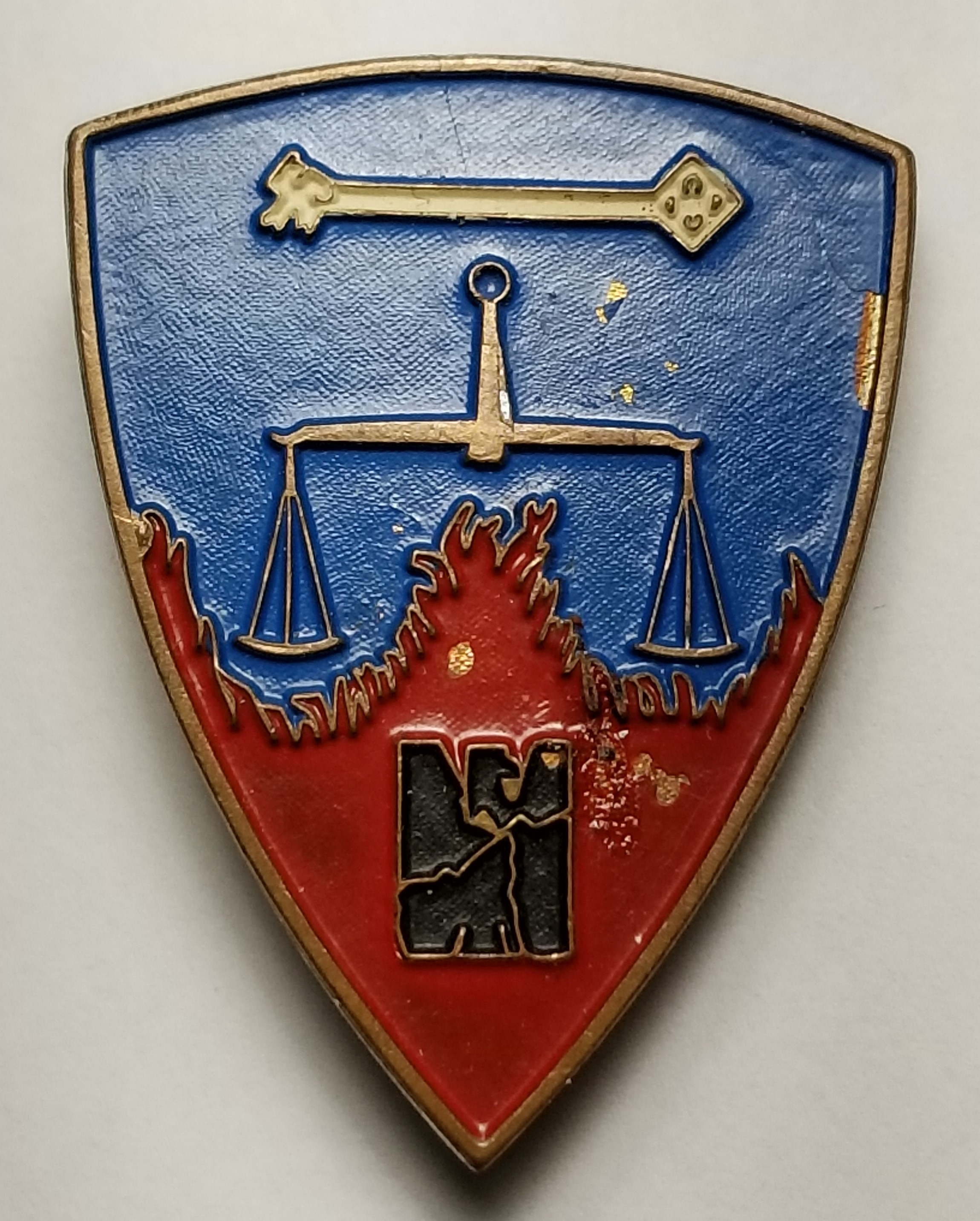 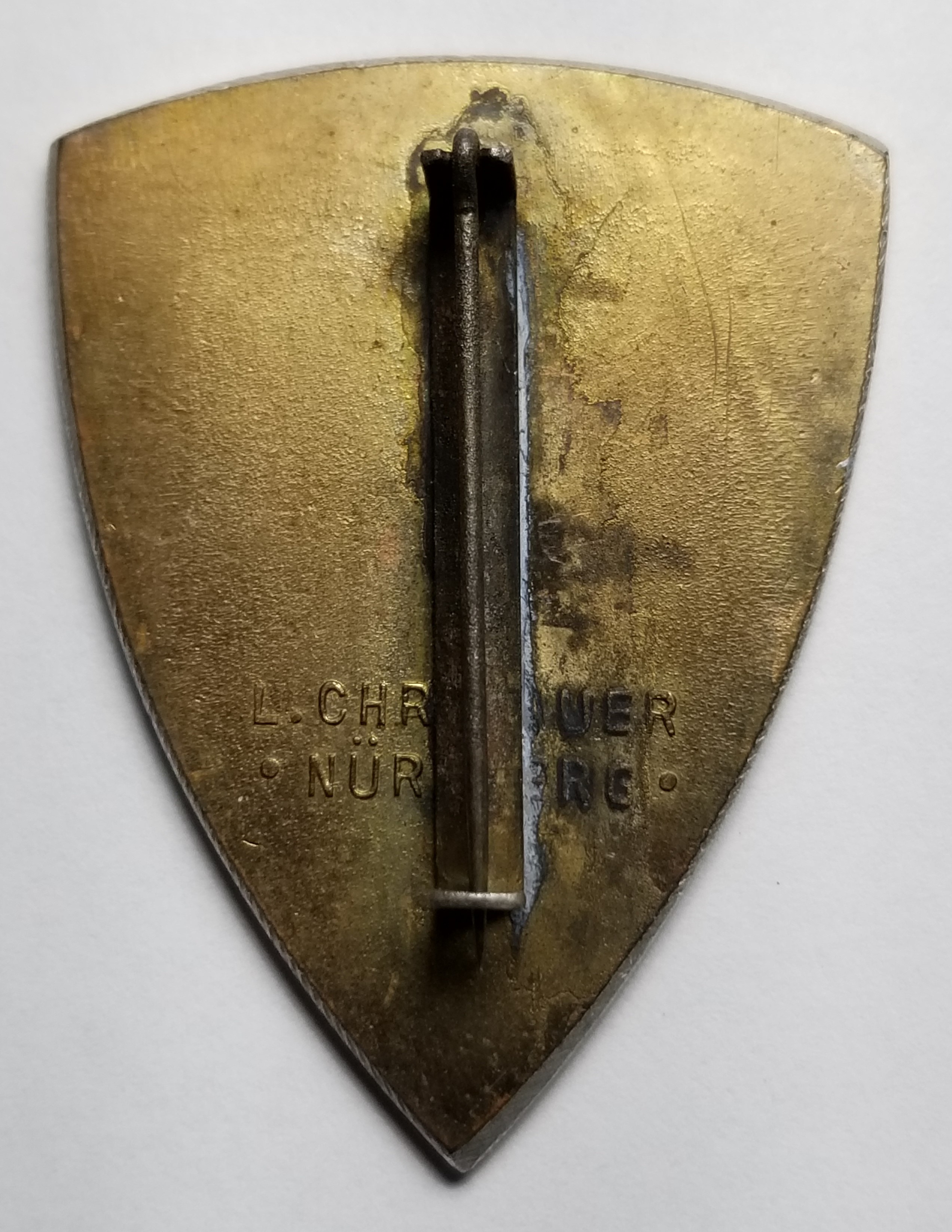 Hans Veith died on March 9, 1991 in the State of California.

My heartfelt thanks to Brian Lewis of Bangkok, Thailand and Lutz Müller of Weisenheim am Berg, Germany for their assistance in researching possible Freikorps units that Hans Veith may have been a member of.