This is an interesting memorial photo of Bavarian Reserve Lieutenant Otto Lang.  The inscription at the bottom of the photo reads: “Zur Erinnerung/ an/ Leutnant d. R. und Komp.-Führer im 1. bay. Inf.-Rgt. 12. Komp./ Otto Ritter von Lang/ gefallen vor Douaumont am 12. Juni 1916.” (In remembrance/ of/ Reserve Lieutenant and Company Commander in the 1st Bavarian Infantry Regiment 12th Company/ Otto Ritter von Lang/ fallen before Douaumont on June 12, 1916″.  In the photo he is wearing his Iron Cross 1st Class.  A large medal bar consisting of an Iron Cross 2nd Class and a Bavarian Military Merit Order 4th Class with Swords, and a Military Max Joseph Order Knight’s Cross with the ribbon worn in his tunic buttonhole, were painted onto the photographic negative.

On the reverse of the framed photo is a printed obituary. 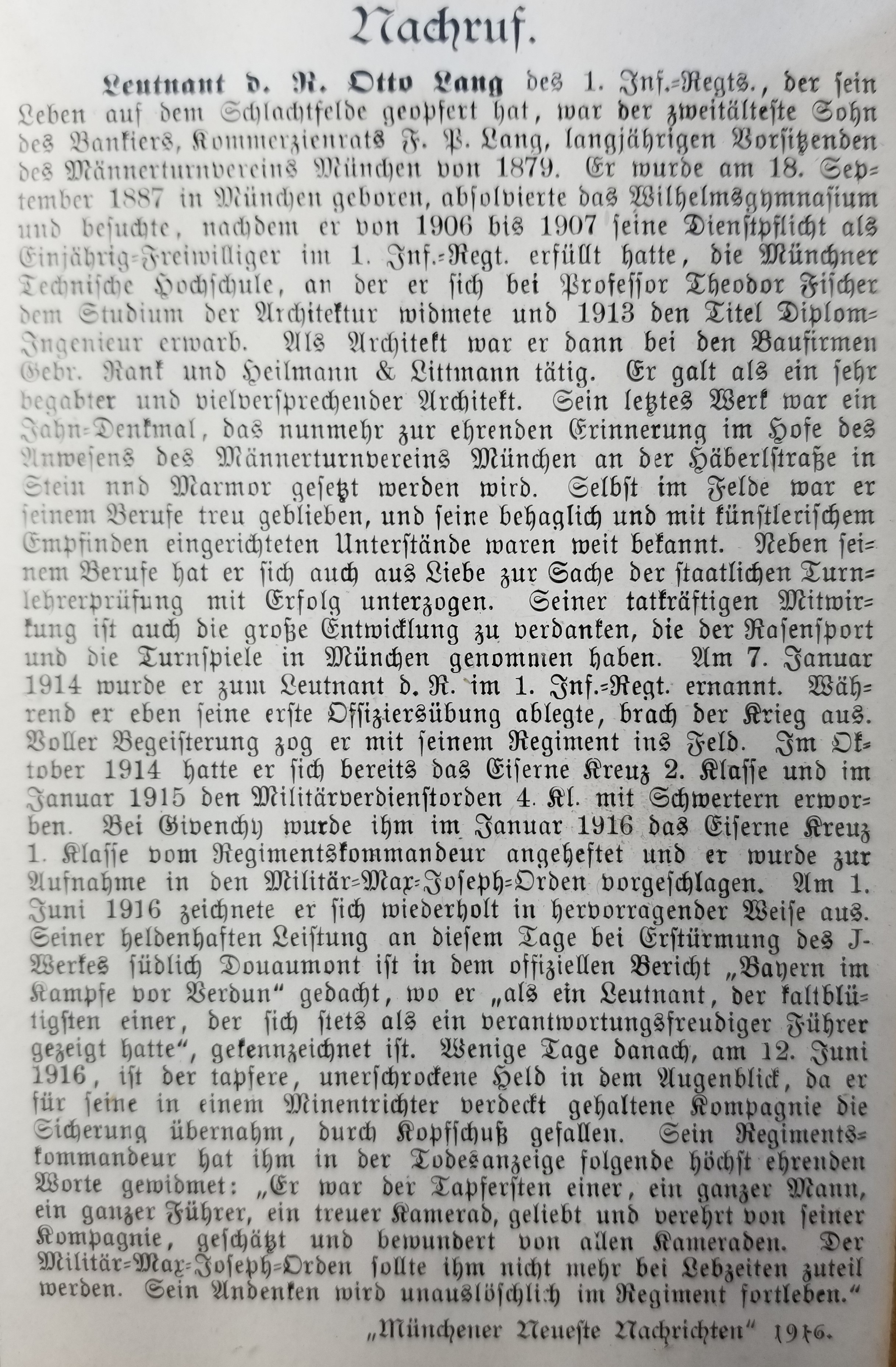 The following is a translation of the obituary:

Lieutenant of the Reserve Otto Lang of the 1st Infantry Regiment, who sacrificed his life on the battlefield, was the second oldest son of the banker, Commercial Councilor F. P. Lang, long-time chairman of the Munich Men’s Gymnastics Club from 1879.  He was born in Munich on September 18, 1887, graduated from the Wilhelmsgymnasium and, after completing his duty as a One-Year Volunteer in the 1st Infantry Regiment from 1906 to 1907, attended the Munich Technical University, where he devoted himself to the study of architecture under Professor Theodor Fischer and in 1913 obtained the title of Graduate Engineer.  He then worked as an architect for the construction companies Gebruder Rank and Heilmann & Littmann.  He was considered to be a very talented and promising architect. His last work was a Jahn-memorial, which will now be placed in stone and marble in honor of the presence of the Munich Men’s Gymnastics Club on Häberlstrasse.  Even in the field he was successful in his profession because of his love for the cause of the State Gymnastics Examination.  Thanks to his active participation, the great development of field sports and gymnastics in Munich has taken place.  On January 7, 1914, he was appointed Lieutenant of the Reserve in the 1st Infantry Regiment.  The War broke out while he was doing his first Officer exercise.  With enthusiasm he went into the field with his Regiment.  In October 1914 he had already acquired the Iron Cross 2nd Class and in January 1915 the Military Merit Order 4th Class with swords.  At Givenchy, the Iron Cross 1st Class was pinned on him by the Regimental Commander in January 1916 and he was proposed for inclusion in the Military Max Joseph Order.  On June 1, 1916, he excelled repeatedly.  His heroic performance on that day when the J-Works south of Douaumont was stormed is commemorated in the official report “Bavaria in the Battle of Verdun”, where he was characterized “as a lieutenant, the cold-blooded one who had always shown himself to be a responsible leader”.  A few days later, on June 12, 1916, the brave, intrepid hero was shot in the head at the moment when he took over the security for his Company, which was concealed in a mine crater.  His Regimental Commander gave the following most honorable words in the obituary notice: “He was the bravest one, a true man, a true leader, a loyal comrade, loved and revered by his Company, valued and admired by all comrades.  The Military Max Joseph Order was no longer to be awarded to him during his lifetime.  His memory will remain indelibly with the Regiment. ”

The excerpt from “Bayerns Goldenes Ehrenbuch” regarding Lieutenant Lang’s actions at Givenchy: 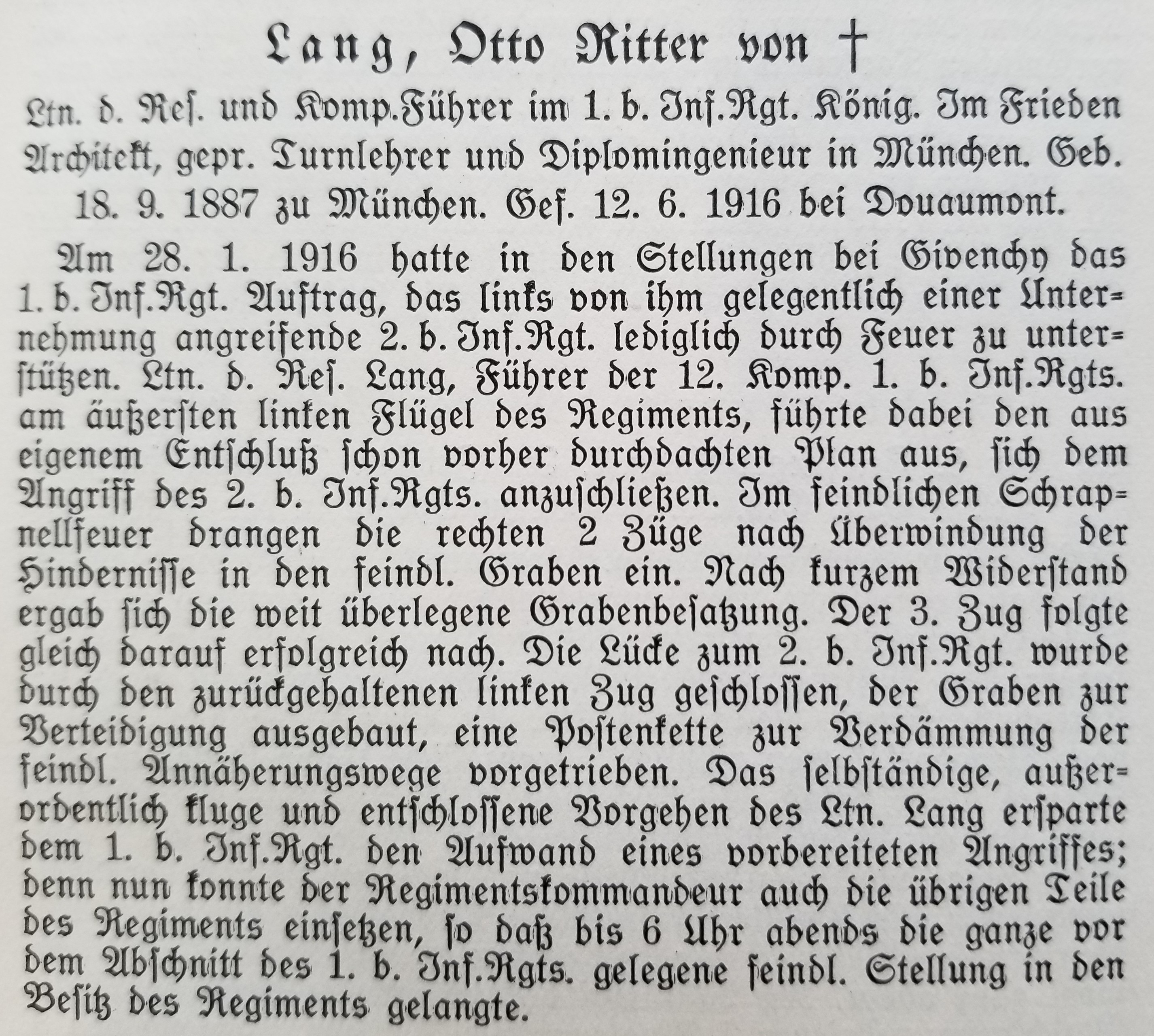 After graduating from the Wilhelmsgymnasium in Munich, he joined the 1st Infantry Regiment on October 1, 1906 as a One-Year Volunteer. January 7, 1914 Lieutenant of the Reserve.  He moved into the field with the 11th company and briefly was the leader of the 10th, 11th and 12th companies, with which he remained.  1914 battles: Badonviller, on the Vezouse, near Saarburg, battle in Lorraine, before Nancy-Epinal, on the Somme.

Lieutenant of the Reserve Ritter von Lang fell on June 12, 1916 near Douaumont, through a shot to the head, when he took over the security of his Company sheltering in a mine-crater.  Accepted into the Military Max Joseph Order on January 28, 1916.  His Regimental Commander dedicated the following honorable words to him: “He was the bravest one, a true man, a true leader, a loyal comrade, loved and revered by his Company, valued and admired by all comrades.”

On September 9, 1916 Lieutenant of the Reserve Otto Lang was appointed to the Military Max Joseph Order as a Knight.  On October, 2, 1916 Otto Ritter von Lang was registered in the Nobility Register (Adelsmatrikel).