Sources vary regarding the number of 1914-1918 Gold Bavarian Bravery Medal awards, but if we look at the publication by Dr. von Hessenthal and Schreiber, we get a good idea regarding the number of awards distributed.  A total of 1,198 Gold Bravery Medals are listed, with 745 awards (1914 until the end of 1916) having been struck in gold, and with 453 awards (1917-1918) having been struck in silver which was gilded. 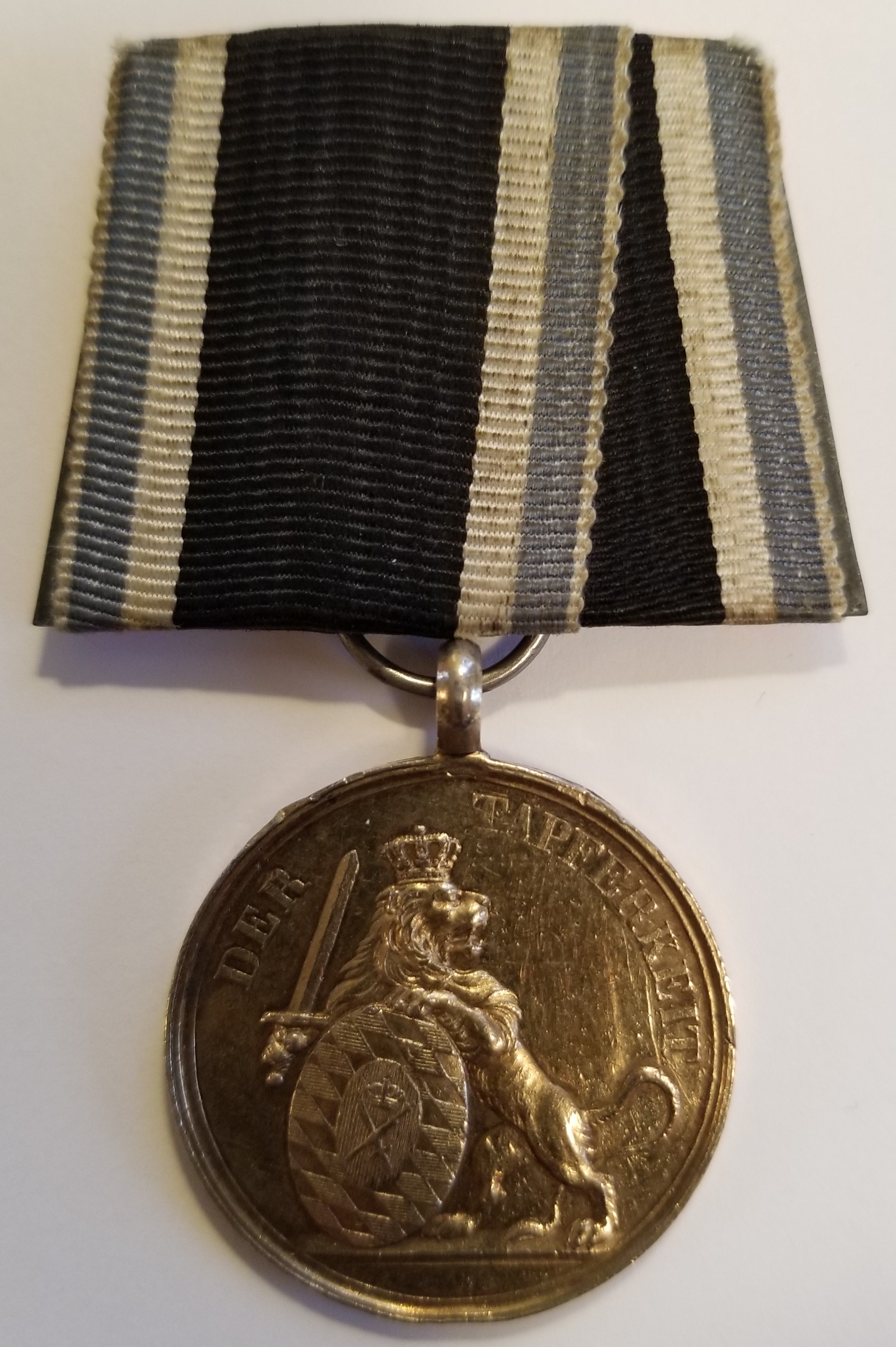 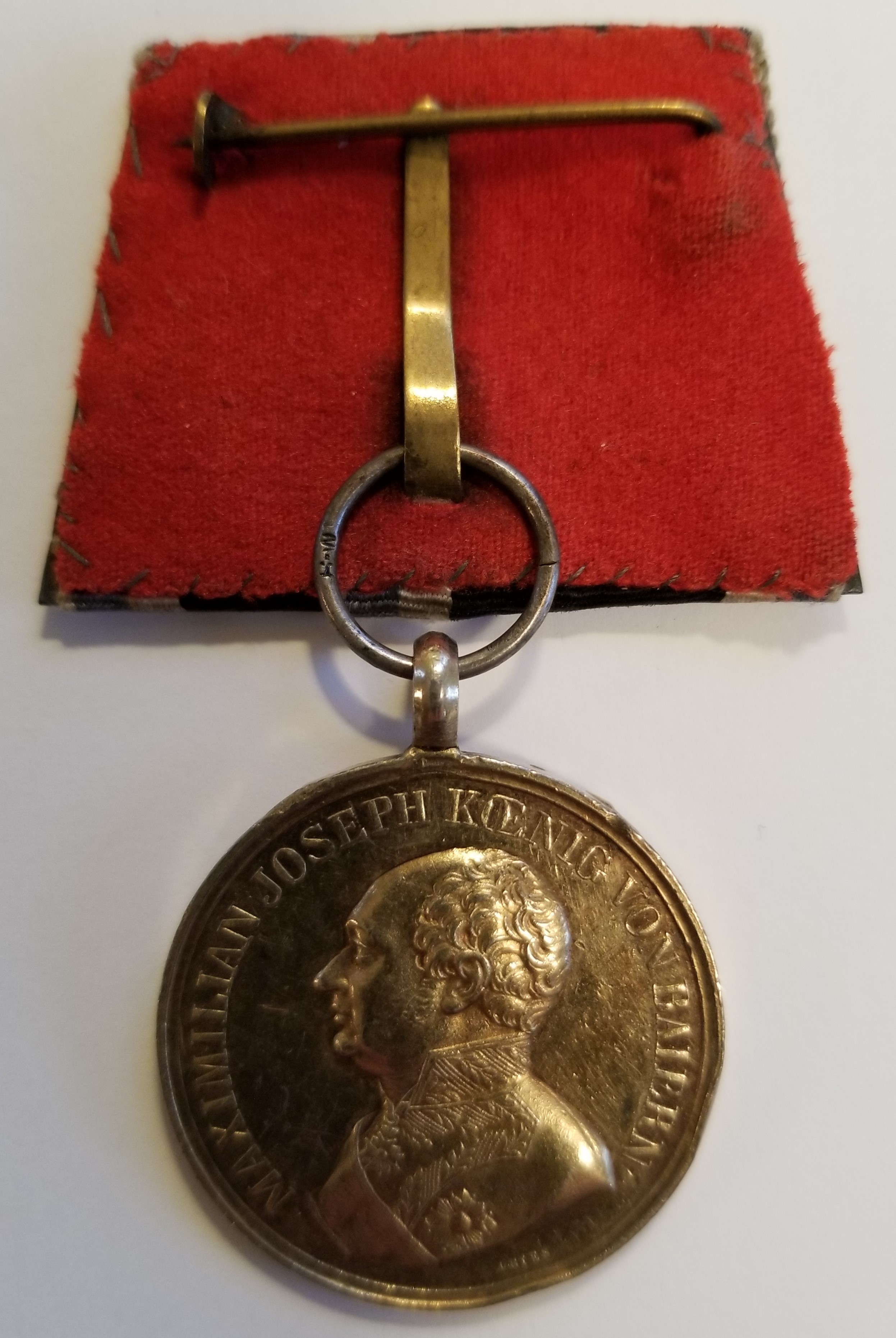 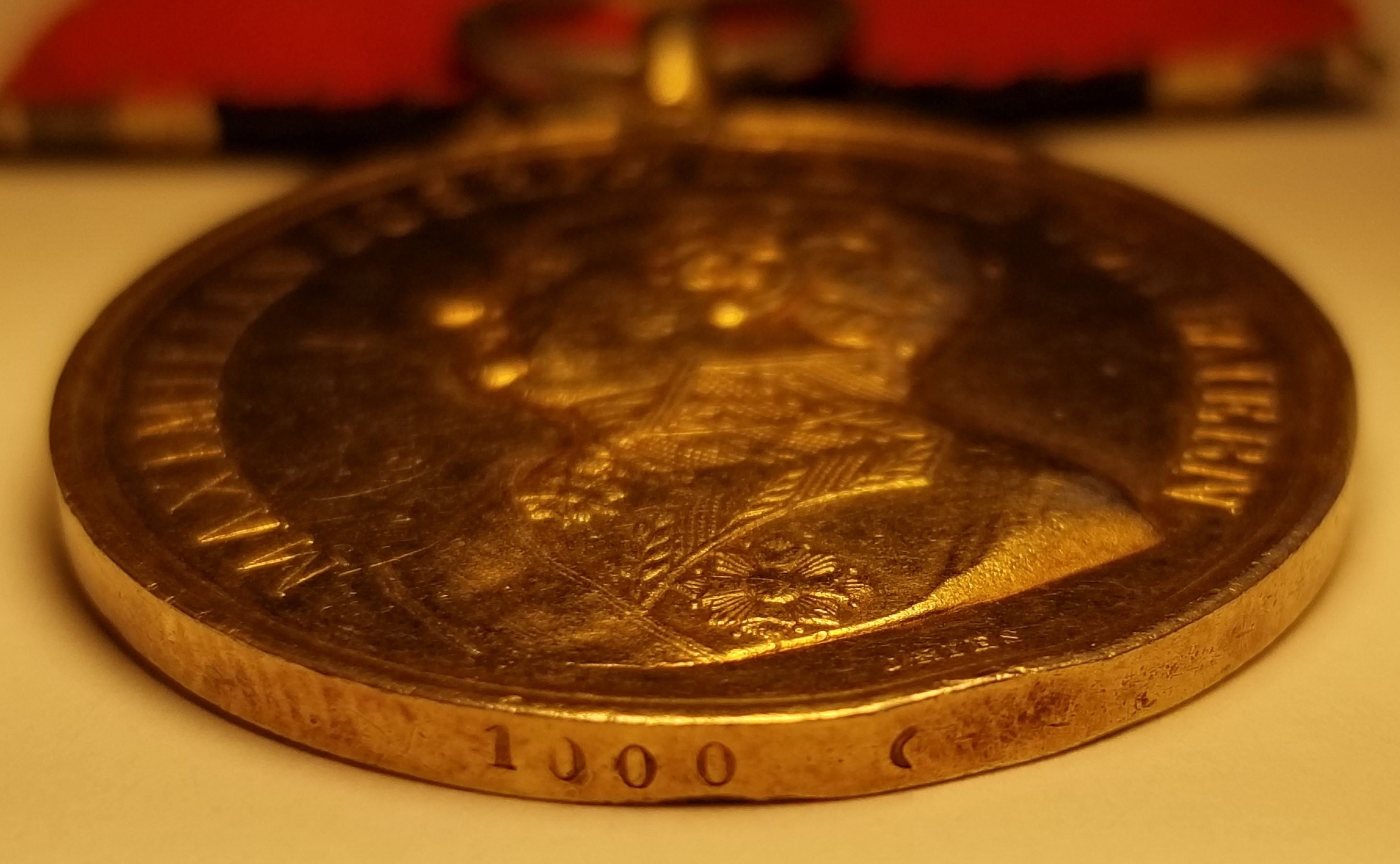 Figure 3: Detail of the “1000” and “half-moon” symbol edge impressions. Image from the author’s archive.

Accompanying this medal was a miniature version for wear on the recipient’s lapel when in civilian clothing. 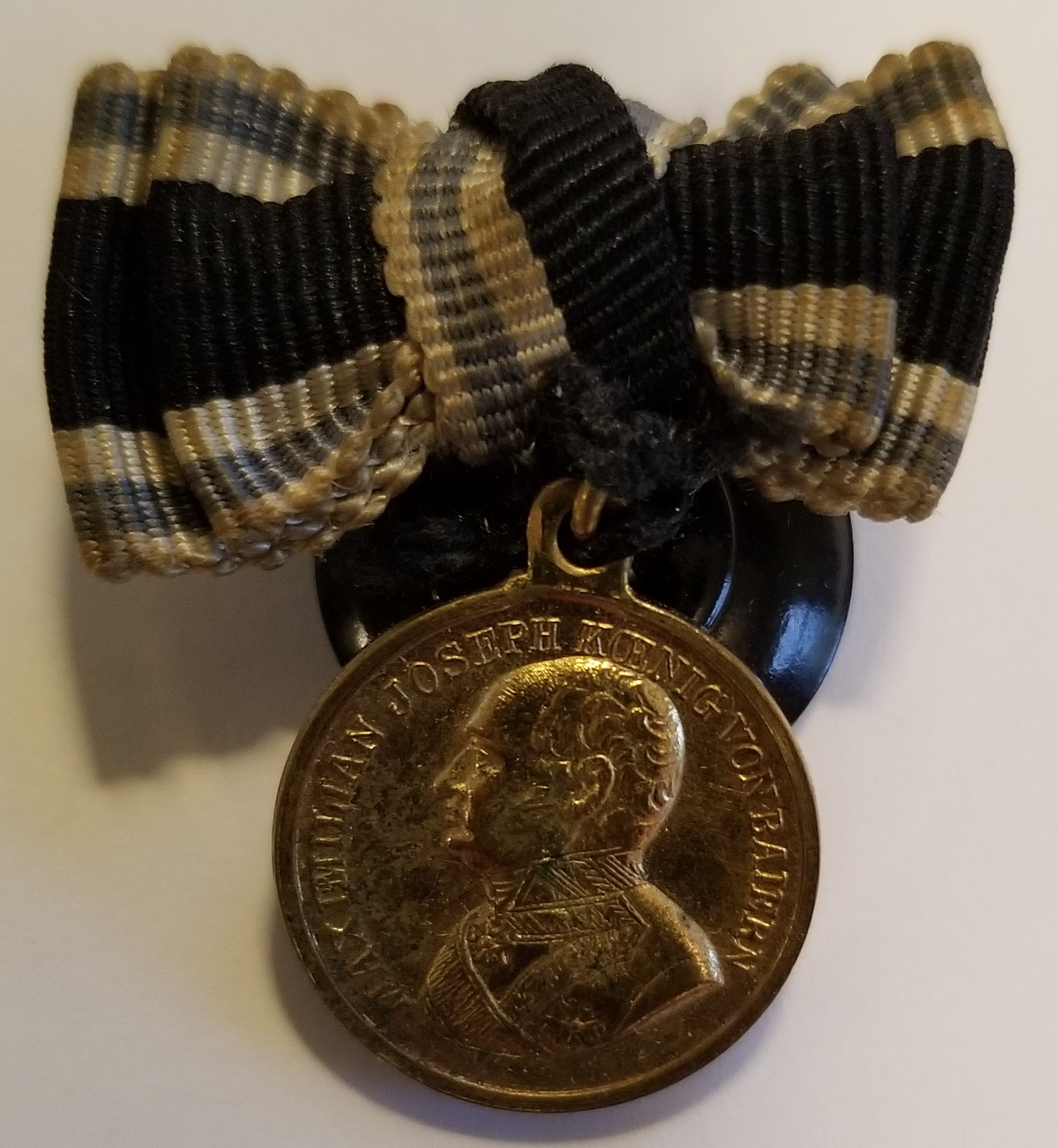 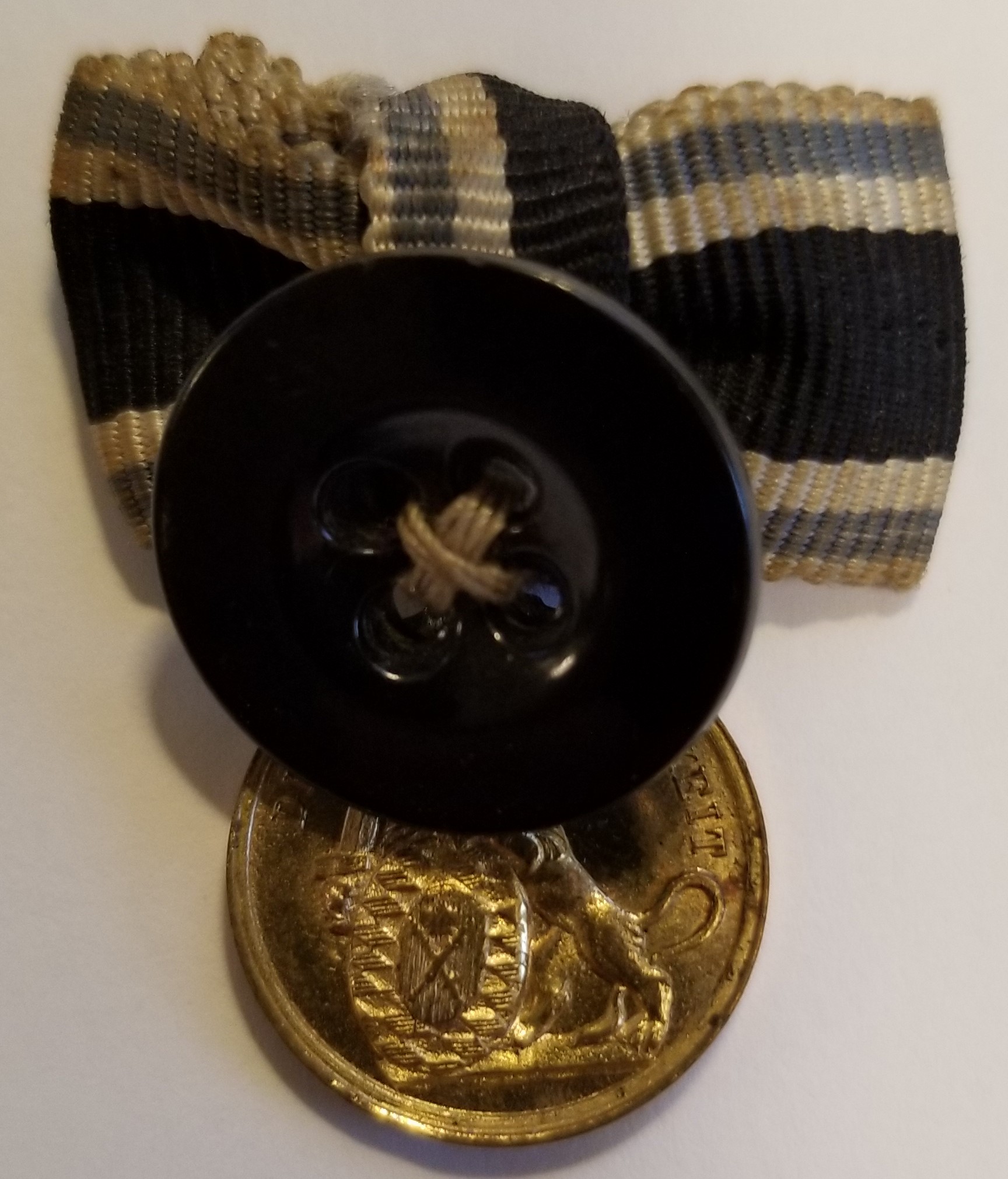 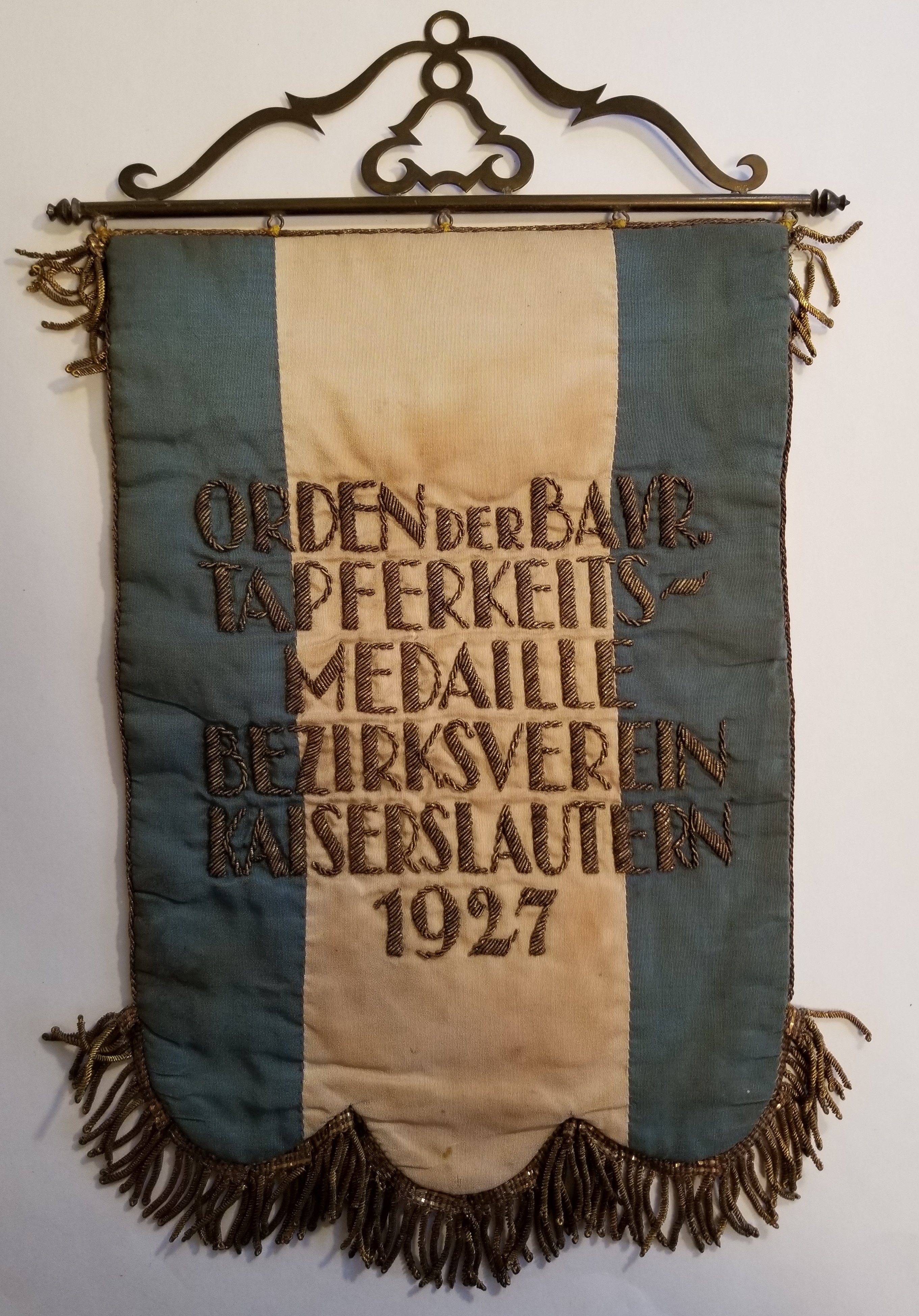 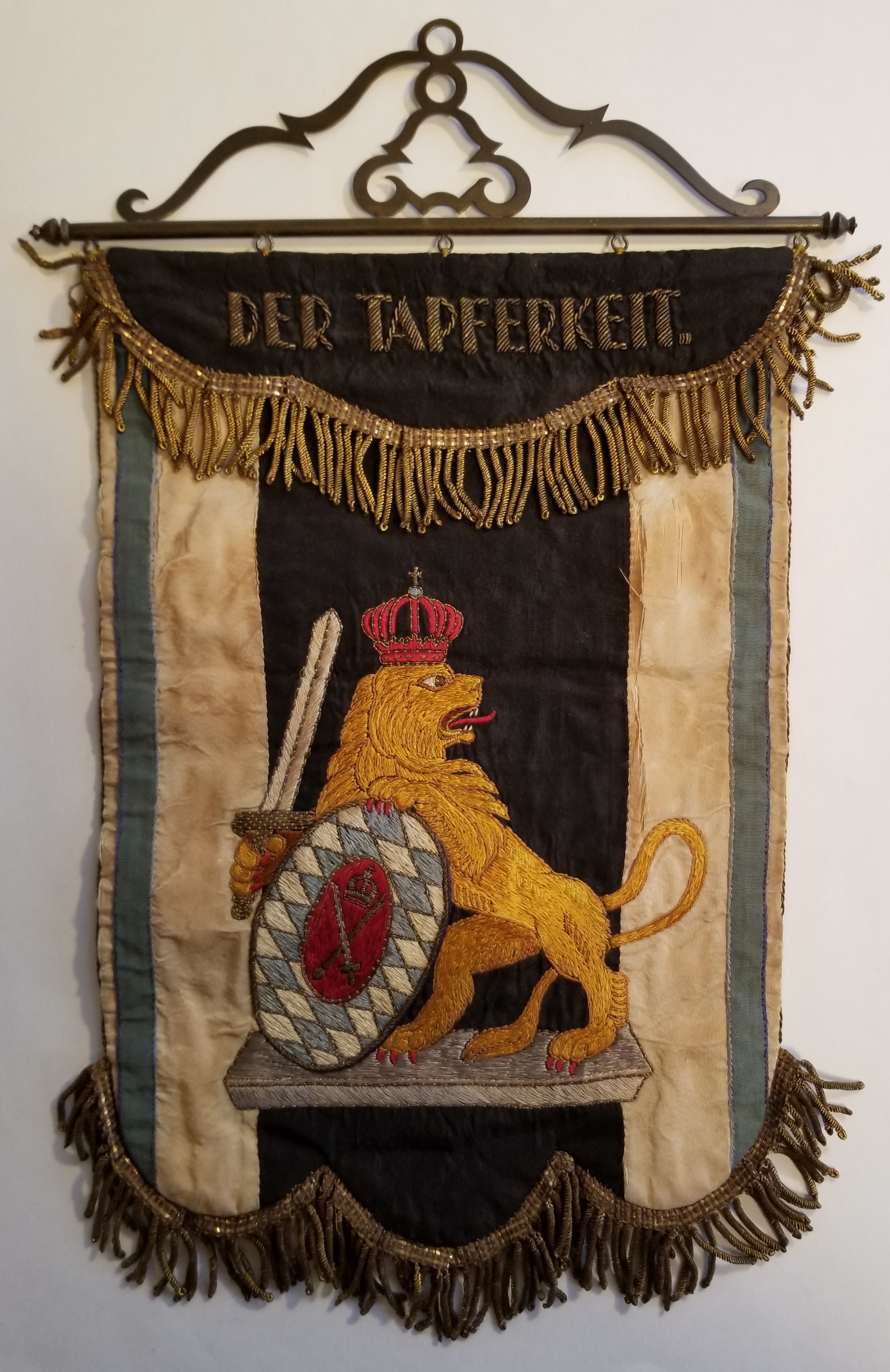 In addition, a copy of “Bayerns Goldenes Ehrenbuch” also accompanied the items. 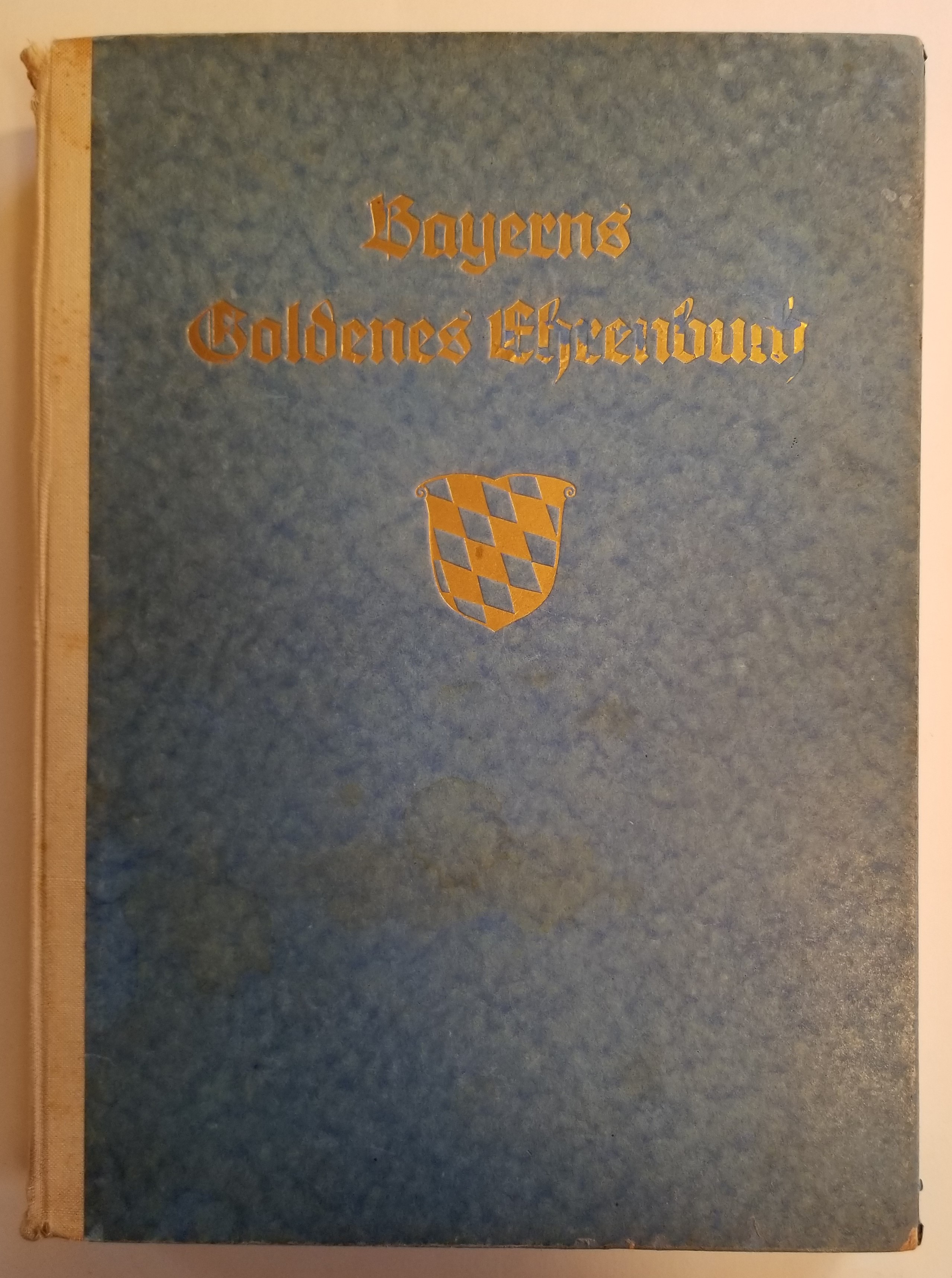 On the inside cover of the “Bayerns Goldenes Ehrenbuch” the name of the owner of the book “Franz Gilch/ Kaiserslautern/ Herzoz-v.-Weimar-Str.3” is stamped. 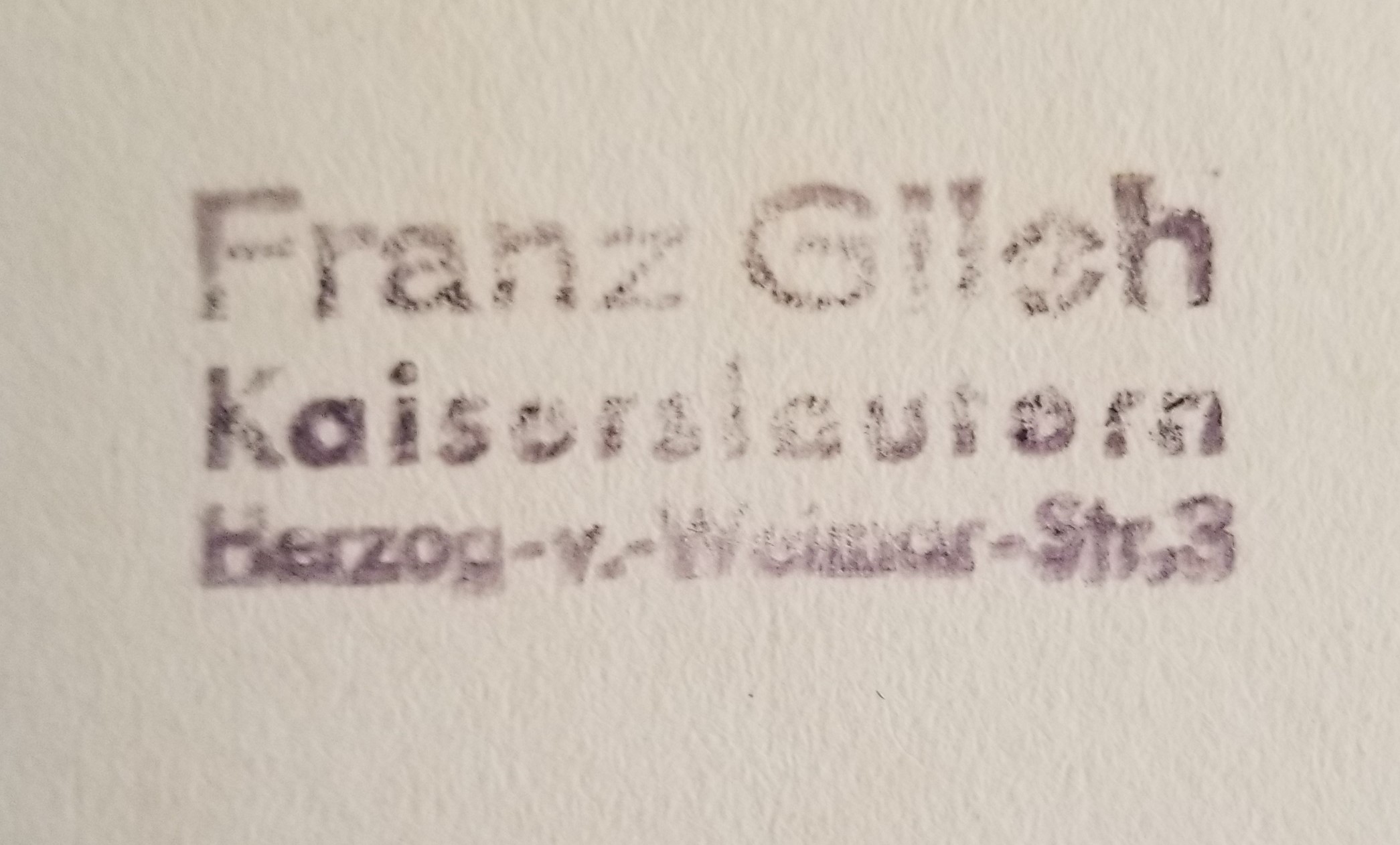 Figure 9: Owner’s information stamped on the inside cover of the “Bayerns Goldenes Ehrenbuch”. Image from the author’s archive. 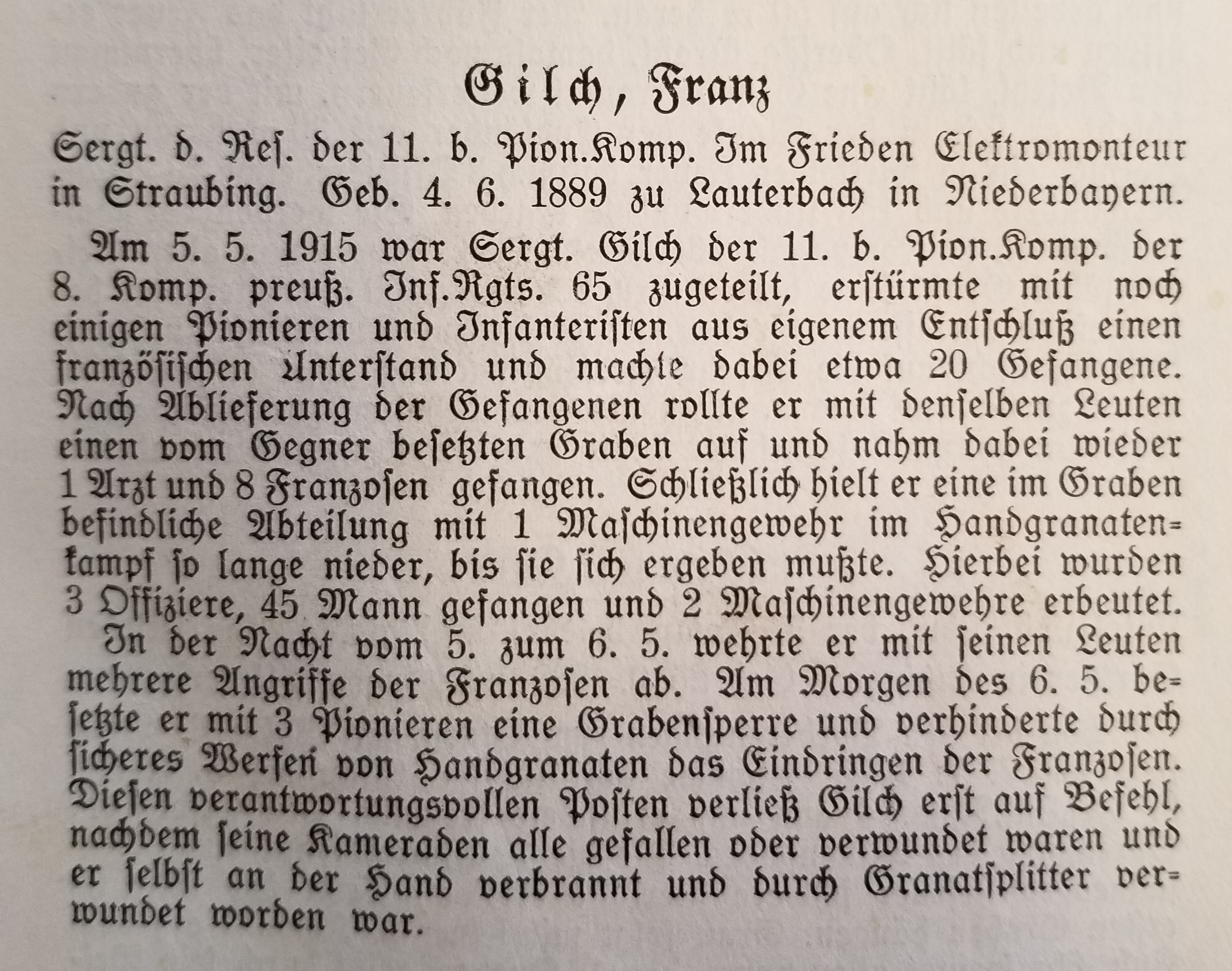 A translation of the citation for Franz Gilch:

Sergeant of the Reserve of the 11th Bavarian Pioneer Company.  In peacetime electric-assembler in Straubing.  Born June 4, 1889 at Lauterbach in Niederbayern.

On May 5, 1915 Sergeant Gilch was assigned to the 11th Bavarian Pioneer Company of the 8th Company of Prussian Infantry Regiment 65, and with a few other pioneers and infantrymen stormed a French dugout and captured about 20 prisoners.  After the prisoners had been delivered, he rolled up a trench occupied by the enemy with the same people and again captured 1 doctor and 8 Frenchmen.  Finally he held down a section in the trench with 1 machine gun in a hand grenade fight until it had to surrender.  Here 3 officers, 45 men were taken prisoner and 2 machine guns captured.

In the night from May 5 to May 6, he fought off several French attacks with his men. On the morning of May 6, he occupied a trench-barrier with 3 pioneers and prevented the French from entering by assuredly throwing hand grenades.  Gilch only left this post of great responsibility on command after his comrades had all been killed or wounded and he had been burned on the hand and wounded by fragments of grenades.

Thus we have an interesting group of items that tell the story of a soldier’s bravery many years ago.