Attachments, an interesting story of embellishment, Part I

In this blog I thought I would begin a review of the history of the attachments to the orders, medals and decorations of Austrian and the Austro-Hungarian Empire. This will be the first part of a five part series on this topic. For the purpose of this discussion I am going to define attachment as an addition or embellishment to an order, decoration or medal that is added to enhance it or to alter its meaning or status in a meaningful way. Most of the attachments I will be describing were officially issued by the Austrian or Austro-Hungarian government.  There are a few attachments that will be discussed in this series of blogs that were not officially authorized but were sanctioned to be worn. Any additions to an award that does not fall into the categories I have just described above will not be included in this work as they do not meet the minimum criteria to be considered official or officially sanctioned attachments.

So far as I can determine the first attachment to any Austrian award was the slide found on the Order of the Golden Fleece. The order which was established in 1430 was originally worn on a chain. However circa 1519 Charles the V authorized the wearing of the fleece on a thin black or red ribbon. Sometime in the following half century the ribbon became standardized in color and width, the color being red and the width 35 mm. As the wider ribbon became commonplace a slide was introduced (Figures 1-2) to assure that the fleece badge hung properly when worn around the neck.  This slide which is approximately 30 X 31 mm and which varied in shape and design over the centuries was the first Austrian attachment. 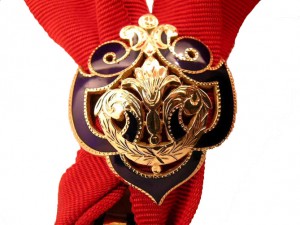 Figure 1: Order of the Golden Fleece slide. Image from the author’s archive 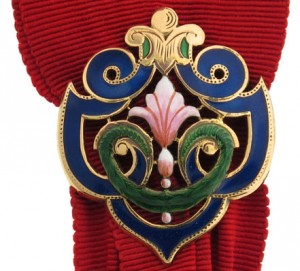 The first attachments other than the slide found on the Order of the Golden Fleece were unofficial. In 1806 some recipients of the Order of Maria Theresia knights badge begin to wear the Maria Theresia ribbon with an attached bar on which was a representation of the knights badge (Figure 3)  instead of the knights badge itself when in civilian dress. These were worn in the button hole as were the knights’ badge of the order. These bars are gold and enamel and are 17 mm in height and 41 mm in width. They weigh 7 grams. 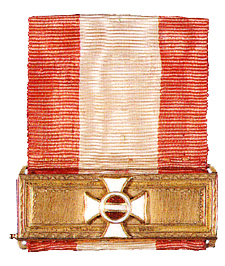 The next example to be explored as part of the history of attachments is that associated with the 1792-1804 Honor Medal (Ehren Medaille) later called the Bravery Medal issued during the reign of Emperor Franz II.  This attachment (Figure 4) is in the form of a rectangular gold clasp. In this case it had oak leaf borders on the top and bottom. Inside of a raised edge at the top and bottom is a frame of laurel on which is a raised image of Emperor Franz II with long flowing hair and a laurel wreath on his head facing to the right. These clasps were unofficial and worn instead of the medal on the medal ribbon in the button hole by recipients based on their personal taste and preference. 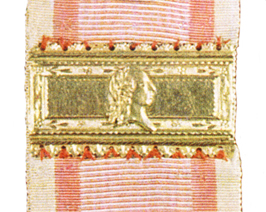 Figure 4: Clasp associated with the 1804-1809 Honor Medal. Image from the author’s archive.

A slightly different clasp (Figure 5) was worn on the 1809 Bravery Medal indicating that the fashion that had originally brought these clasps into being in 1792 was still in force. This clasp is shaped like an H which has been laid on its side. In the center of the H is a round raised image of Emperor Franz I with long flowing hear and a laurel wreath on his head facing to the right. These bars were unofficial and were worn based on the personal preference of the recipient. They were often worn on a ribbon in the button hole instead of the full size decoration. The wearing of these clasps on ribbons without the accompanying medals was prohibited after 1811. After that time these clasps could be worn only on the ribbon with the accompanying decoration. In some instances the fashion was to wear the medal reverse side forward since the bar on the ribbon depicted the obverse of the decoration. 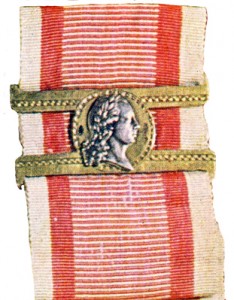 In 1835 Emperor Ferdinand I introduced the Civil Merit Medal (Zivilverdienstmedaille). This medal which was worn on a red ribbon also featured a clasp (Figure 6). In this instance it is presumed the clasp is official as by statute of 1811 unofficial clasps were not to be worn without the medal. This clasp was in the form of a gold rectangular bar with the word MERITIS on the viewers left and a representation of the obverse of the medal in the center.  It was worn with when the recipient was in civil dress 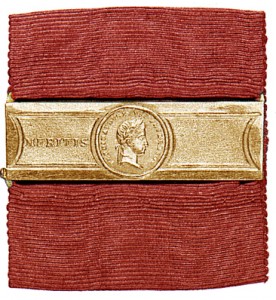 This concludes part I of the discussion on attachments. I hope you enjoyed this exploration of the early examples of attachments. Next time I will describe the attachments associated with the war decoration.
Rick