Ashantee Medal with Coomassie Clasp to RN and RM

Many collectors describe the reverse of this medal which features bush fighting between British soldiers and Ashanti warriors as their favourite amongst the campaign medals issued during the Victorian period. 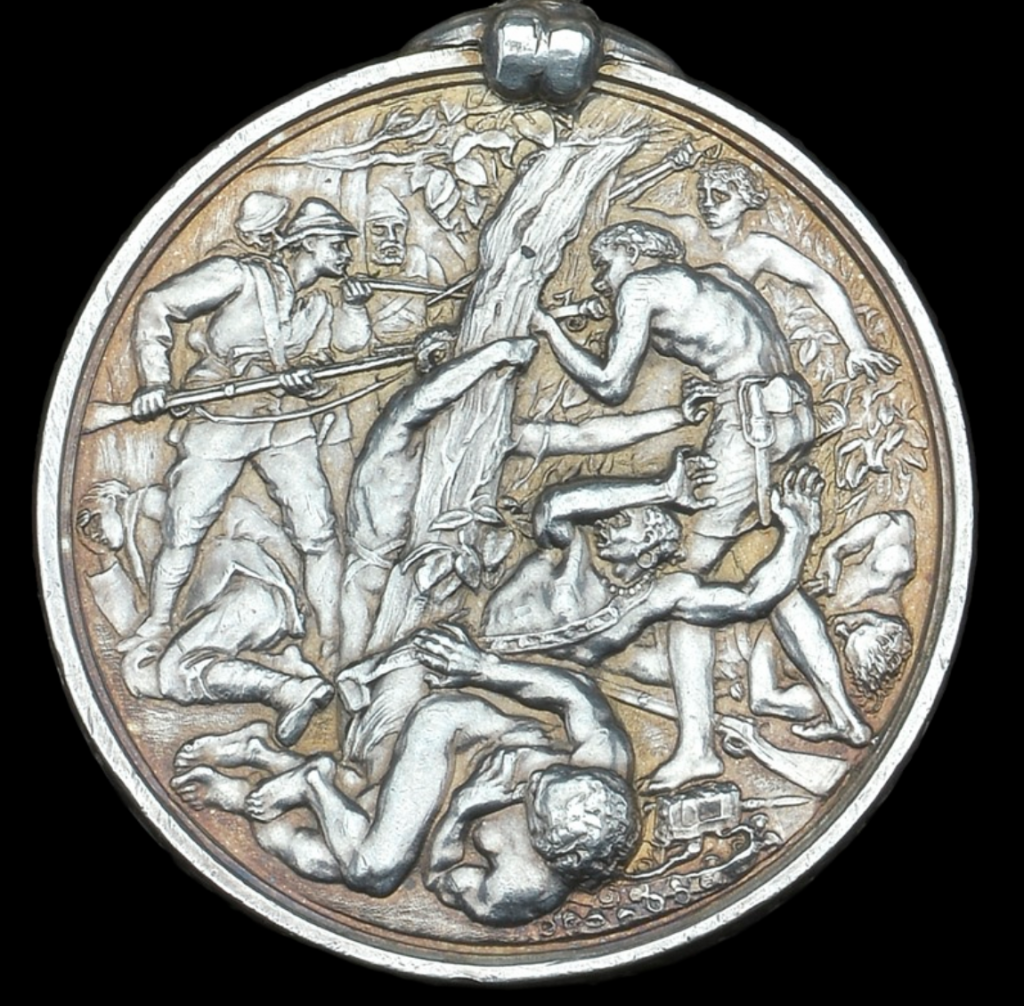 The Coomassie clasp was awarded to those present at Amoaful and the capture of the capital, or those protecting the lines communication north of the Prah river. Only 240 medals with clasp were awarded to RN/RM personnel and although medals were awarded to men from 10 ships, almost half of them belonged to HMS Active.

A clasp roll has been created from the roll compiled by Captain K.J. Douglas-Morris, R.N. and published by J.B Hayward & Son in June 1972 and is reproduced here with the express permission of Mr. Hayward. In addition, some information related to medals appearing for sale or at auction has been incorporated in to this database.

Note: Since originally posting this, I have compared the roll to the roll which appeared 15 years later in the Captain’s book and added another 20 men who were not on the original roll published by John Hayward. The table above has been updated to reflect 260 men versus the original 240.

The Roll does not include Kroomen, many of whom had self chosen and colourful names for example

The Medal and the War

The medal was sanctioned in June 1874 and was awarded for Wolseley’s campaign against the Ashantis under King Kofi Karikari and like most conflicts of the day, the source of the dispute lay with commerce and specifically the stoppage of the annual payment of £80 to the King for the use of the port of Elmina which occurred when the British bought the fort from the Dutch in April 1872 as part of the Dutch Gold Coast sale.

After the British Gold Coast protectorate had been invaded by an Ashanti army in January and April 1873, the British with a lack of resources were unable to respond in a punitive fashion until Wolseley arrived in the autumn of that year  with  a plan to defeat the Ashanti and occupy their capital of Kumasi which was some 170 miles inland.  Significant preparations were needed to build a road that would allow troops to reach the capital and could be protected and fortified along the route.  Troops from the Black Watch, Rifle Brigade and Royal Welsh Fusiliers, along with the 1st and 2nd West Indian Regt. began arriving in December 1873 and by January the force moved inland to face the Ashanti warriors.  The battle of Amoaful was fought on January 31, 1874 and after a decisive victory by the British forces, the capital was was reached on February 4. Kumasi was found abandoned and after a short occupation, the royal palace was demolished and the capital was burned.

The Ashanti, signed the  Treaty of Fomena in July 1874 to end the war. Among articles of the treaty  included payment of 50,000 ounces of  gold as indemnity for the expenses incurred for the war, an end to human sacrifice, freedom of trade between Ashanti and Her Majesty’s forts on the Coast and that the King of Ashanti would guarantee that the road from Kumasi to the River Pra shall always be kept open.

More than 3,500 medals were issued to the RN/RM who served on 20 ships primarily as support for the Army and less than 7% were awarded to men who served ashore with the  small Naval Brigade and were entitled to the clasp.