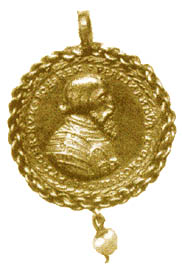 Introduction: The Archduke Ferdinand of Tyrol Golden Grace Medal was apparently issued as a reward for special merit in support of the emperor and his dynastic goals.

Interesting Facts: The word “grace” as used in the title of this medal had a different meaning when it was issued than it does today. Thus “grace” should be interpreted as “honor” thus this medal’s title is in today’s terms the Archduke Ferdinand of Tyrol Gold Honor Medal.

Design:  A Round medal with ornamental edges and a large loop suspension eye at the top.

Obverse: A bust of Archduke Ferdinand in full dress amour facing to the right. Around the edge of the medal is inscribed FERDINANDVS.D.G.ROM.IMP.HVN.BOH.REX (Ferdinand with the grace of God Roman Emperor and Hungarian, Bohemian King)

Ribbon: A three stranded gold chain which passes through the eye at the top of the medal