The application of proof marks to orders, medals and decorations was in most cases mandatory and required by law. Proof marks were applied to decorations during the manufacturing process. However, were they applied before or after the enameling process?

Most of us collectors know that some countries imposed the application of marks during an import or export process to a piece, which could result in the destruction or chipping of the enamel. Those buying from french auction houses particularly know about that.

Was a jeweler skilled enough to hit a marking tool with a small mullet to impress the silver content and/or a manufacturers logo into an order decoration after it being finished, or did they choose the safe route in applying the markings beforehand?

I would be very interested if somebody has the definite answer to this question?

The following image is a nice example of a proofing attempt creating a double image of a manufactures code. Despite of the alignment with the 938 silver proof mark the letter is actually a W for Wagner & Son in Berlin. The jeweler must have not had the best control of the W proofing tool and hit it in a way that it bounced off to create a double impression. 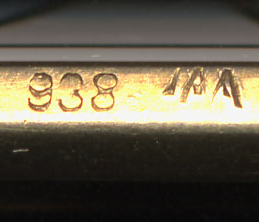 The following image shows the exact same proof mark sequence, yet the silver content mark as well as the W is only half visible, since the craftsman must have hit the corner of the cross arm of the order. This would indicate that the marking would be applied before enameling since a strike like this would for sure have damaged the glass like substance.

Fig 2: Proof mark struck to the corner of the cross arm.

I am interested in comments and evidence to support this theory one way or another.