This photograph is of a group of soldiers of the Royal Bavarian 1st Jägerbataillon (Königlich Bayerisches 1. Jägerbataillon “König”). The NCO who is seated and who is wearing his large medal bar appears to have been awarded the Bavarian Military Merit Medal (bayerische Militär-Verdienstmedaille), the Prussian Military Honor Award 2nd Class (preußische Militär-Ehrenzeichen 2. Klasse), the Centennial Medal, and a China Campaign Medal with two (2) campaign bars. Sadly, the reverse of the photo does not list any information. 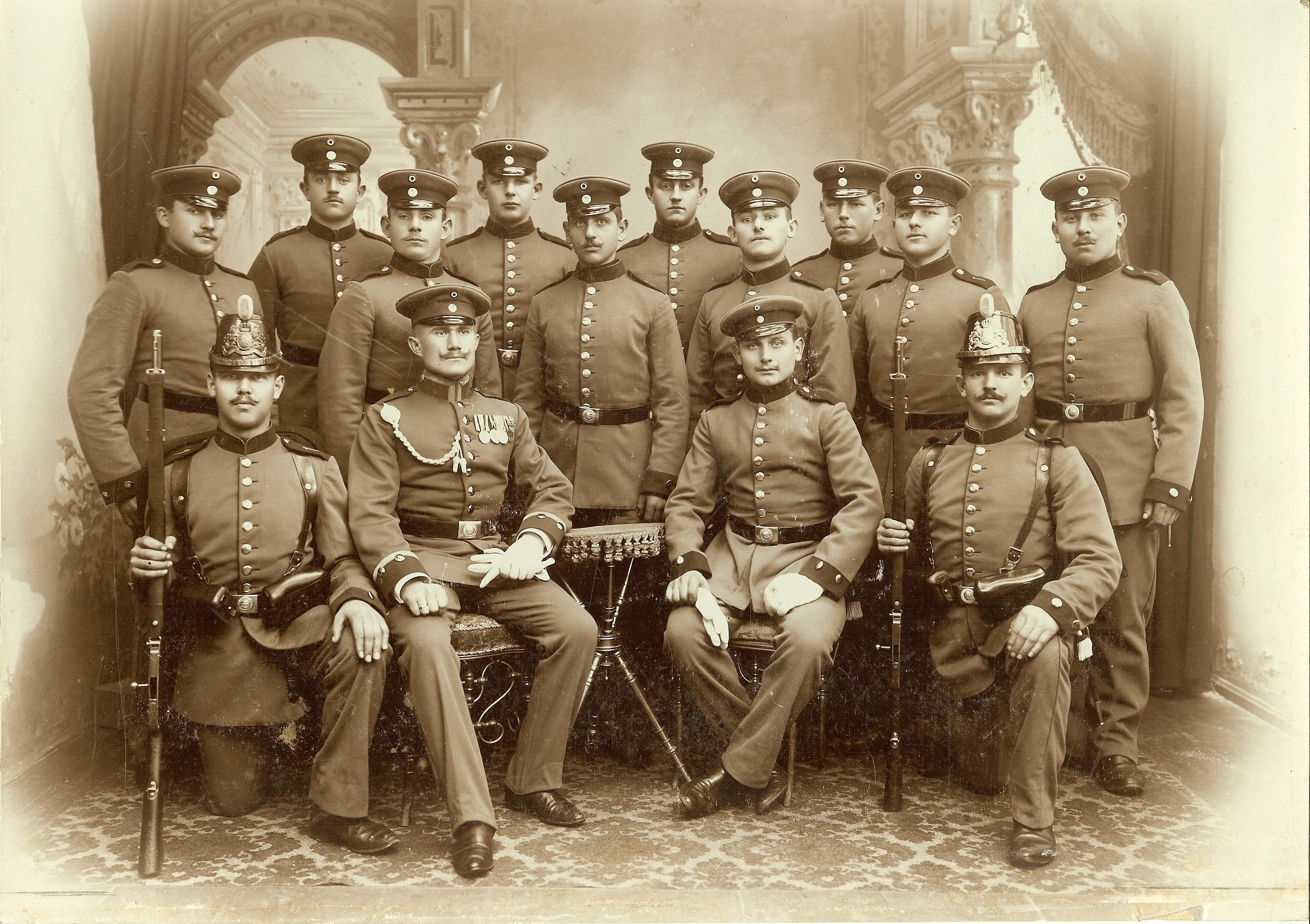 Thus, the NCO served in the East Asian Expedition Corps (Ostasiatisches Expeditionskorps) in China during the Boxer Rebellion (Boxeraufstand), most likely during the period from 1900 to 1901 (some occupying troops stayed longer). The Prussian Military Honor Award 2nd Class was most likely also awarded to him during this conflict. During the Boxer Rebellion (and during the 1864, 1866, and German Southwest Africa campaigns) the Iron Cross was not awarded.  Therefore, for these conflicts, the Prussian Military Honor Award 2nd Class was the rough equivalent of the Iron Cross 2nd Class as awarded during the 1870-1871 Franco Prussian War, and the 1914-1918 World War. The Centennial Medal denotes that he was serving in the Army as early as 1897.

While I am not knowledgeable regarding the specifics of uniforms, equipment, insignia, nor weapons of the Bavarian Jäger troops, I did notice that the ammunition pouches carried by the two soldiers holding rifles appear to be of the M1887 model, thus suggesting, but not proving, that the photo was likely to have been taken prior to the start of the World War in 1914. I have seen a photo however taken right after the start of the World War with a Jäger carrying M1887 ammunition pouches. So the dating of the photograph is inconclusive based only upon equipment carried as older equipment stayed in service for many years.

Thus we appear to have a photo of one of the few recipients of the Silver Bavarian Military Merit Medal awarded for the Boxer Rebellion.

Thank you for your interest in this photograph. If anyone can provide further information regarding the uniforms, equipment, insignia, or weapons shown in the photo, or if anyone knows the identity of this NCO, please feel free to share the information. Comments are welcome.