Since February is Black History Month, this is a medal relating to the largest mass movement among African-Americans in the early part of the 20th century. The Cross of African Redemption appears in numerous photographs of Marcus Garvey, who founded the Universal Negro Improvement Association (UNIA). 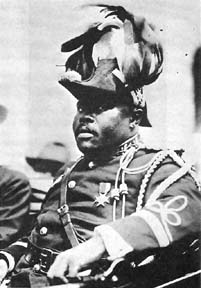 Marcus Garvey was Jamaica-born (1887) and left school at age fourteen to learn the printing and newspaper business. He moved to London in 1912, where he became heavily involved in politics and nationalist movements. Two years later, having returned to Jamaica, he founded the Universal Negro Improvement Association and, in 1917, established its headquarters in New York. By 1920, Garvey had created the African Legion, which dressed in military-style uniforms. Garvey obviously liked the military regalia, as he was regularly photographed in uniform, wearing a single medal and a plumed fore-and-aft cap. 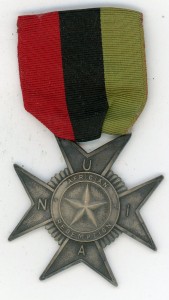 The Cross of African Redemption seems to be the UNIA’s only medallic issue. It’s a four-armed cross, with a star in the center and “African/Redemption” on the central surround, with the initials “U/N/I/A” on the cross arms. The reverse is blank, except for the maker’s mark “Robbins & Co/Attleboro”. The medal is known in silver and bronze, although it is very likely that there is a gilt version as well. The ribbon has equal stripes of red, black and green.

By 1922, Garvey was involved in confrontations and controversies with several other African-American leaders and organizations. Charges and counter-charges flew, many involving corruption in the UNIA and the Black Star Line, a shipping company Garvey founded to transport passengers to Africa. The federal government soon took note of Garvey and J. Edgar Hoover took a personal interest in the investigation and prosecution of Garvey. Garvey was indicted and convicted on mail fraud charges, beginning a prison sentence in 1925. His sentence was commuted two years later and Garvey was deported to Jamaica. With Garvey out of the picture, the UNIA lost its momentum and faded away. Garvey died in London in 1940.