While my last blog entry looked at researching a British soldier, this entry will look at researching a British officer in the East India Company’s Army.   The medal group to this officer includes an Army of India medal, clasp Bhurtpoor, A Maharajapoor Star and a Sutlej medal for Sobraon. The medals are named, in the same order: “Lieut. B.Y. Reilly, Sap. & Min.”, “Captain B.Y. Reilly Sappers and Miners”, and “Major B: Y: Reilly Engineers”. 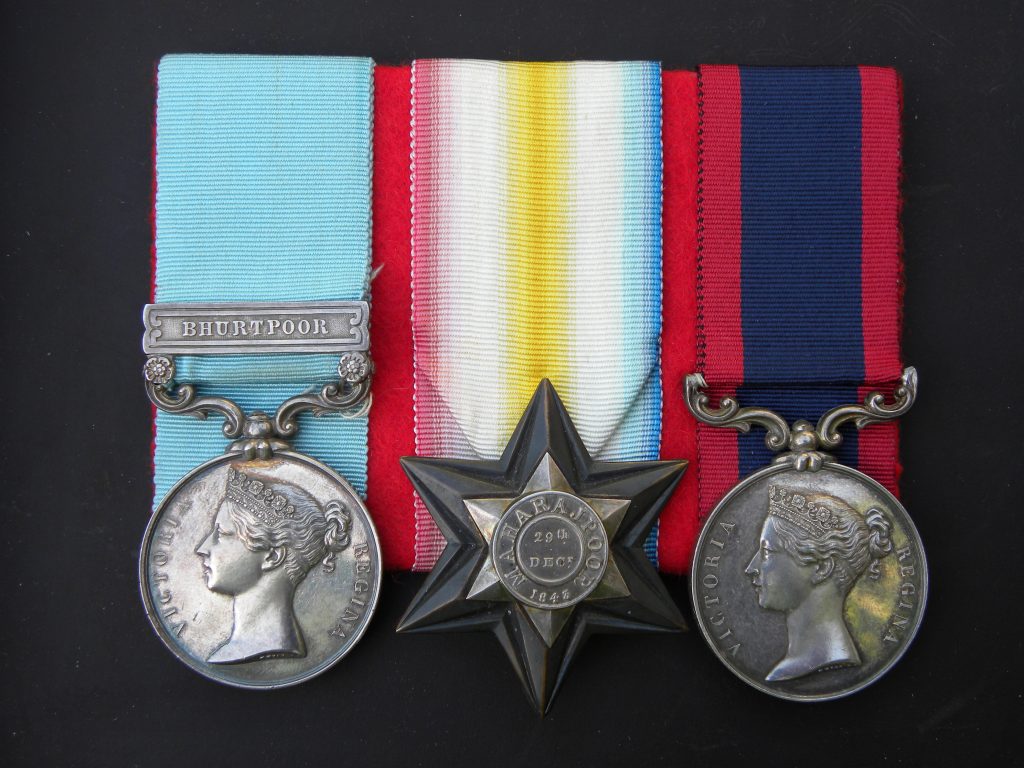 From 1810 until the Indian Mutiny, the East India Company ran a school, Addiscombe College, to educate officers for their private army. Initially Addiscombe only educated officers for the Artillery and Engineers but after 1827 graduates would also be sent to the Infantry and Cavalry.   Part of the class of 1821, Bradshaw York Reilly (occasionally he is also refered to as Bradshaw Yorke Reilly) was commissioned into the Bengal Engineers in 1823. From his file from the East India Company papers (located at the India Office Library papers at the British Library), we know that Reilly was nominated to Addiscombe by George Abercrombie Robinson, a director of the Company, upon the suggestion of Reilly’s father, Bradshaw Lewis Reilly. From his cadet’s papers (which is part of his personal file at the India Office Library Papers), Reilly was from Bath but it is unclear much more about his family background.  If anything he was deliberately vague, but more on that in a bit.

If we look at the Army of India medal roll (fully searchable at www.dnw.co.uk), we see that Reilly is listed as entitled to the medal with the clasp Bhurtpoor and named to him as a Lieutenant in the Sappers and Miners. If we return to his file from the India Office, we also find a 3 page synopsis of his military career. It also mentions him as sharing in the prize money from the Bhurtapoor campaign. Further details include his holding the rank of Commandant of the Bengal Sappers and Miners from 1840 until December 21, 1841 and then again from April 20, 1843 until 1847. His file also notes that by the time of the 1st Anglo-Sikh War, for which the Sutlej Medal was issued, Reilly took command of the 2, 3, 4, 5, 6 and 7 Companies of the Bengal Sappers and Miners in the assault at Sabraon. On November 4, 1848 he transferred to the Invalid Establishment as a Lt. Colonel and he later died at Landaur, India on November 5, 1853.

We now have some basic information that we can use to dig further into Bradshaw York Reilly. With his father’s name and a few searches on Ancestry and Findmypast, we can fill out some further information. Clearly Reilly’s father had some connections to the East India Company but we know nothing about his profession and background. The discovery of a Masonic register from Bath shows Bradshaw Lewis Reilly as a member with the profession of Wine Merchant. But Bradshaw Lewis Reilly’s last will and testament, found under the Probate Records of the National Archives at Kew Gardens, England gives a bit more. Bradshaw Lewis Reilly is listed as “of York House in the City of Bath”; the York House in Bath was also know as the York House Hotel until the early 2oth Century. The birth of another son, Edmund William Reilly, in 1815 shows the elder Reilly as “Victualler”. Although this remains speculation, it seems fairly clear that the elder Reilly was more involved in “trade” than respectablility, and used his wealth to help push his children up the social ladder.

What is further clear from digging throughout Ancestry and the various genealogy sites is that Bradshaw Lewis, in addition to his credible military career, married Emily Robson on 13 July 1836. A number of children were born of this marriage, 5 sons and 4 daughters; of those sons a number survived to adulthood and went on to military careers and produced children that, in turn, had military careers. But that is for another entry.