The method for displaying a group of orders, decorations, and medals that is attached to clothing. Specific methods include the German Unordentlich mount, trapazoidal mount, Prussian parade mount, and Frackspange, and the court mount. – Laslo

Prussian Parade Mount: A type of Imperial German mount for orders, decorations, and medals displayed from a suspension ribbon that is characterized by the use of the Bogenband. The Bogenband is suspension ribbon that is arched at the bottom to form a “U”-shape and is usually fixed to a metal plate which varied in size to accomodate a single Bogenband or a group. One the reverse of the plate are a horizontal pin and a pin to attach the ribbon to the breast of the clothing. The badge associated with the ribbon is connected by its ribbon ring from a hook located on the plate just above the arch and between the inside edges of the ribbon. Because of the attachment of the hook, the arched ribbon fell behind the badge, and the bottoms of the badges in a group could be arranged in a straight line. -Laslo

Frackspange: A type of Imperial German mount for orders, decorations, and medals displayed from a suspension ribbon that was worn at a steep angle on the lapel of formal Naval and civilian attire. The Frackspange is identical to the Prussian parade mount except that is was assembled in reverse order of the Prussian parade mount so that the most senior insigne would be at the top of the mount. In addition, badges were fixed at an angle so as to appear level when worn on the lapel. Besides Imperial Germany, the Soviet Union also adopted an angular mounting. Synonymous terms are Navy mount and diplomatic mount. -Laslo

Court Mount: A method for displaying a group of orders, decorations, and medals favored in Great Britian for appearances at the Royal Court and other formal accasions. The distinguishing feature of the court mount is that the suspension ribbon folded back at the top of the mount is extended behind the upper half of the badges. The group is assembled on a stiff backing with a horizontal pin on the reverse. The ribbon is stitched to the backing: and at or near the suspension device, the badges are also stitched to the backing to minimize contact marks. For a large group, the suspension ribbons and badges are overlapped. A synonymous term is royal style. -Laslo

See a tutorial on doing your own court mount here! 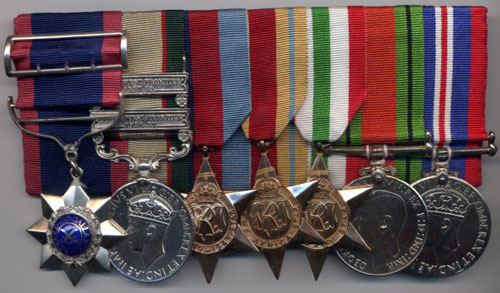 Swing Mount: A means of displaying medals used by many countries world wide that is similar to the court mount except that the ribbon does not extend behind the badges. The ribbons are attached to a “bar” that has stick pin mounts for attaching to the uniform. For large groups, the suspension ribbons and badges are often overlapped. 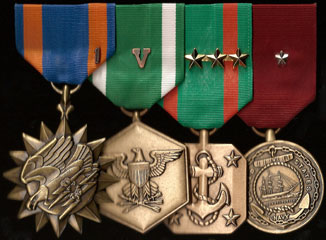