How to Research a Member of the WW1 Canadian Expeditionary Force
Through Campaign Medals.

A Guide To Traditional & Online Sources compiled by Neil Burns OMSA #6975
with additional assistance from the Members of the CEF Study Group.

Every British 1914-15 Star, British War Medal & Victory Medal issued to a Canadian Recipient has their Service Number,
Highest Rank Attained, Initial, Last Name & Unit first attached to upon arrival in France.
This information can be found on the reverse of the 1914-15 Star and on the rim of the British War & Victory Medals.
This is similar to the British custom regarding First World War Medals. 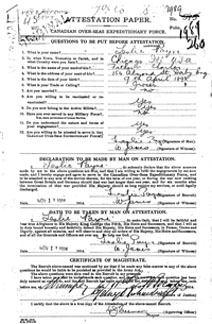 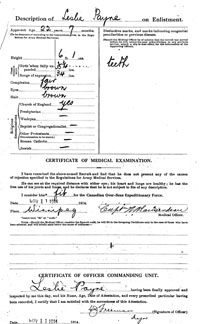 Volunteers for the Canadian Expeditionary Force were questioned at the place of enlistment to complete the Attestation papers which included the recruit's name and address, next-of-kin, date and place of birth, occupation, previous military service, and distinguishing physical characteristics. Recruits were asked to sign their Attestation papers, indicating their willingness to serve overseas. By contrast, men who were drafted into the CEF under the provisions of the Military Service Act (1917) completed a far simpler form which included their name, date of recruitment, and compliance with requirements for registration.

This series consists of approximately 620,000 individual Attestation papers and Military Service Act Enlistment forms. They were completed in triplicate at the time of enrolment in the CEF. At least one copy of the Attestation papers or Enlistment form accompanied the CEF member overseas, where it was placed on the individual personnel file at the Ministry of the Overseas Military Forces of Canada in London.

Paper originals of the Attestation papers and Enlistment forms are described by the National Archives of Canada as RG 9, II B8, Vols. 1-1256.
260 Battalions were raised only 52 Battalions served on the Frontline.

Attestation Forms can be researched and viewed here:

Casualties
• Additional information on those who died in service can be found on the following sites:

• The Canadian Virtual War Memorial.
o Searchable by Name and Year of Death only.
o Will provide unit, service number, date of death and allow you to digitally view their name in the Book of Remembrance as well as provide burial or commemorative information.

• The Commonwealth War Graves Commission.
o Searchable by Name, nationality, branch of service and date of death. Also provides burial/commemorative information and some next of kin information.

• Further Research
o A great PDF file for download: Nicholson's Official History of Canada in the Great War is available as a PDF file.